In Search Of A Midnight Kiss 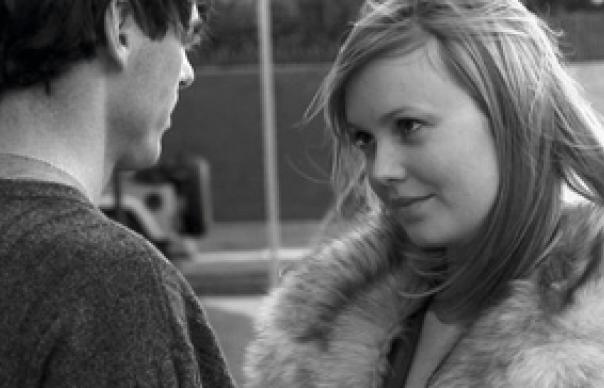 There is, you might assume, nothing new you could do with two people stumbling round a city, talking. After all, it’s been a staple of pretty much any Woody Allen film you care to think of, while Richard Linklater’s Before Sunrise and Before Sunset seemed to stretch the idea to its limit. But writer/director Alex Holdridge‘s no-budget Slackervettes take on what happens to two strangers who meet on a blind date in Los Angeles, brings something new to the party. Partly, Holdridge’s black-and-white guerrilla-style of film making (he apparently paid for the film on his credit card) adds an enjoyably shambolic edge to the film.

Partly, too, because in amidst the fortune cookie philosophising on Big Themes (life, love, loneliness), there’s a set of gutsy performances from the leads that anchor the film in some kind of recognisable reality away from sanitised studio chick-flicks.

Wilson, a twentysomething wannabe scriptwriter, is at a low after breaking up with his long-term girlfriend. Facing the dismal prospect of spending New Year’s Eve alone, he places an ad for a date online, and signs it “the misanthrope”. He gets “auditioned” in a cafe by Vivian (Simmonds), all Audrey Hepburn shades, fur coat and clouds of cigarette smoke. She is, unsurprisingly, a hurricane of trouble; but, as Midnight Kiss progresses, Holdridge softens her sharp edges.

Wilson and Vivian set out on their night-long date, and the barbs and cynicism that define their initial conversations give way to a softer, more delicate kind of emotional dependency. With the decrepit movie theatres and empty rooftops of LA reinforcing the shared sense of loneliness experienced by Wilson and Vivian – both newcomers to Los Angeles – you get a sense, perhaps, of how easy it would be to get lost in a city of 10 million people.