House And Land – Across The Field

US duo blur the modern and trad on scintillating second 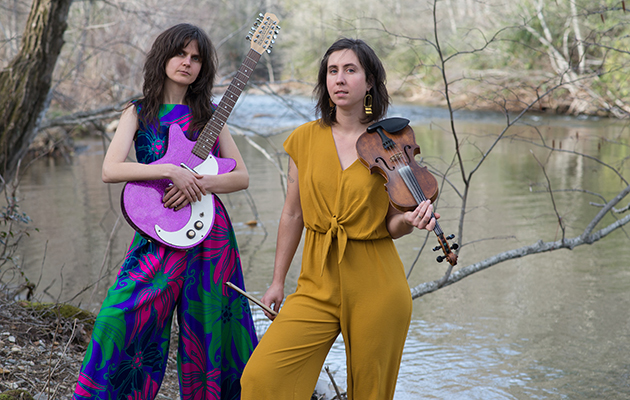 Shirley Collins has always maintained that it’s impossible to damage old folk songs. All you can really aim to do is enhance them, she’s argued, to bring a freshness and modernity without sacrificing their true essence.

It’s something that North Carolina duo House And Land understand only too well. For them, Collins’ music – often in tandem with her sister Dolly – has been a lodestar for their own journey through the expanses of traditional song. One of the most arresting moments on Across The Field, this latest album, is “Blacksmith”, a song that Collins recorded three times over the years, each with different verses. House And Land have chosen to reshape it as a textural drone, an experimental piece full of slowly shifting shadows, backlit by fiddle and the harmonium-like tones of a shruti box. Out front, the interlaced voices of Sarah Louise Henson and Sally Anne Morgan make for a luminous focal point.

Reinvention is only one facet of House And Land. Much like Rhiannon Giddens, Jake Xerxes Fussell or Kaia Kater, Louise and Morgan are all about connections, presenting trad folk songs as mutable entities ready to be flexed into something more personal. And, crucially, House And Land prove that notions of old and new are not so much irrelevant as obsolete.

Appalachian folk is minimal by nature, the use of drone, repetition and microtones finding a mirror in modern improv and free composition. Louise’s electric guitar interludes on “Two Sisters”, for example, are partly taken from a modular synth riff. Similarly, their pastoral rendition of “Rainbow ’Mid Life’s Willows” is motored by 12-string loops and Morgan’s polyphonic fiddle technique.

Neither of them are novices at this sort of thing. Guitarist Sarah Louise grounded herself in arcane blues and folk as a teenager, her self-taught picking style eventually leading to a solo career that’s taken wing of late, most impressively on this year’s Nighttime Birds And Morning Stars, which explored psych, cosmic jazz and more. Morgan, meanwhile, fell in love with age-worn fiddle music at college in Southwest Virginia, prior to joining The Black Twig Pickers a few years ago. She’s also played with drone merchants Pelt and raga-improv trio, Actual Cloud Formations.

The pair met when Louise opened for The Black Twig Pickers at a music hangout in Asheville, hitting it off immediately. As House And Land, a name chosen to mark their ties to the natural world and ancient heritage around them, their musical symbiosis was all too apparent on 2017’s self-titled debut. Across The Field, however, ups the ante in consummate style. Their determination to fully invest themselves in these old songs is evident throughout. As is their insistence that any overtly patriarchal sentiments are stripped clean in favour of a feminist viewpoint. The wonderful “The Cursed Soldier” is one of two songs sourced from North Carolina singer Dillard Chandler. Driven by Morgan’s rolling banjo rhythm, House And Land tinker with the final verse, which traditionally places its sobbing female protagonist as victim of a serviceman who chooses to return to battle rather than remain by her side. Here, Morgan recasts her as an assertive soul who’s already moved on: “Soldier dear I curse you well/Now you’ll be ruined forever.”

This is echoed in their treatment of “Rainbow ’Mid Life’s Willows”. Essentially a tale of a woman imprisoned by her own family to keep her away from a lover, House And Land dismiss the ambiguity of the original lyric by calling out the father and sons as cruel rather than wise and stalwart.

Their extended version of “Carolina Lady”, whose titular subject is the prize fought over by two lusty brothers in its original form, dispenses with lyrics altogether. Inspired by the approach of late-’60s freak-jam outfit Pärson Sound, it’s the most experimental song on the album, a cross-current of electric guitar and mournful fiddle that rises and subsides over the intermittent thump of a kick drum.

This is in marked contrast to “Ca’ The Yowes”, a gorgeous ballad – again taken from Shirley and Dolly Collins, although covered by everyone from Vaughan Williams to Joanna Newsom – that showcases their radiant harmonies. It’s also a measure of their eclecticism. Louise and Morgan may be inseparable from the landscape they’re rooted in, but it hasn’t stopped them from undertaking what turns out to be a fascinating and deeply rewarding journey through the ages.