The chaotic US band’s “classic lineup” convenes for the first time in over 15 years... 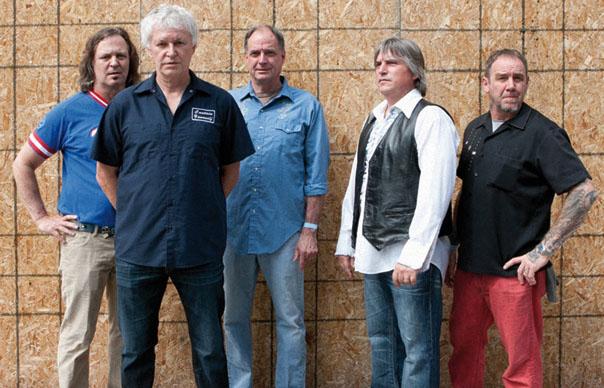 When US indie institution Matador celebrated its 21st birthday with a mini-festival in the unlikely surroundings of Las Vegas’s Palms Hotel & Casino in October 2010, the big draw was not the last ever Pavement reunion show, nor Sonic Youth’s Sister-heavy set, nor even the possibility of finding yourself at the blackjack table with one of Superchunk. No, the biggest clamour of the weekend was reserved for the reformation of a greying, beer-swilling bar band from Dayton, Ohio.

Guided By Voices are a group who still command a great deal of affection, spawning numerous tribute acts (Gilded By Vices, anyone?) and websites dedicated to chronicling their every recorded note (no mean feat – side projects included, there are upwards of 1500 GBV songs in circulation). It’s not so hard to understand the appeal: Guided By Voices songs are typically short and catchy with endearingly daft titles, recorded just primitively enough to deter the casual listener; their vast catalogue rewards the retentive fan; and bandleader Robert Pollard is an avuncular have-a-go frontman who flies the flag for middle-aged Joe Schmoes everywhere.

For a period in the mid-90s, it felt like there was a new Guided By Voices record every week, crammed with pithy lo-fi pop missives called things like “Tractor Rape Chain” and “Big Chief Chinese Restaurant”. Even if they weren’t all classics, the band’s extreme prolificacy transmitted an infectious enthusiasm. Live shows were celebratory affairs, with sets lasting up to three hours and Pollard acting out his rock star fantasies by scissor-kicking his way across the stage, soaked in beer and sweat.

Several slicker incarnations of Guided By Voices soldiered on until 2004, but it’s the reformation of the “classic” mid-90s line-up – Robert Pollard, multi-instrumentalist Tobin Sprout, guitarist Mitch Mitchell, drummer Kevin Fennell, bassist Greg Demos and studio member Jim Pollard – that has got the die-hards frothing. Following the success of the Matador 21 show and subsequent reunion tour, the “classic line-up” decided to make an album together for the first time since 1996’s Under The Bushes, Under The Stars.

In an attempt to recapture some of the patchwork lo-fi charm of 1994’s breakthrough album Bee Thousand, Let’s Go Eat The Factory is entirely home-recorded. Yet despite the familiar set-up, this is no lazy retread of minor past glories. “Chocolate Boy”, “Doughnut For A Snowman” and “The Unsinkable Fats Domino” are typically succinct melodic gems, but elsewhere Guided By Voices appear to be getting gnarlier in their old age.

Opener “Laundry And Lasers” offers a terse volley of strafing drone rock. The three-minute “Imperial Racehorsing” – an epic by GBV’s former standards – is a thrilling psychedelic churn, complete with sizzling guitar wig-outs. The deconstructed rock weirdness of “The Big Hat And Toy Show” sounds like something from the Not Not Fun label, or an early Royal Trux record. It’s not quite what we were expecting, but it’s not unwelcome either.

On the flipside, the deployment of the ersatz string sounds from a child’s keyboard and a cavalier approach to playing and singing in key renders several numbers unlistenable. But the joy of any Guided By Voices release is that you’re on to the next song soon enough.

It was always widely assumed that GBV’s experimental flourishes were a bit of a smokescreen for their lack of technique. But this record is deliberately confounding, suggesting that the reformed band are not content to just turn up and play the expected role of idiot uncles. Let’s Go Eat The Factory is not a brilliant album in and of itself, but it does cast Guided By Voices in a slightly different light: more than just a quirky sideshow, perhaps we ought to view their whole career as a prolonged act of rock’n’roll subversion.
Sam Richards