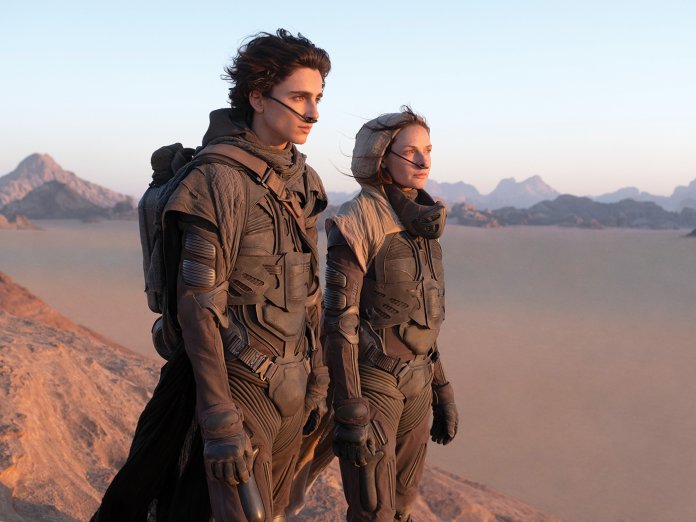 There’s more of Timothée Chalamet in Dune, in considerably less whimsical mood, and more Oscar Isaac too – just as saturnine as in The Card Counter, but behind a severe fatherly beard. This long-awaited blockbuster is cinema’s third stab at Frank Herbert’s supposedly “unfilmable” science fiction epic. Outré visionary Alejandro Jodorowsky tried, but it never happened, while David Lynch did pull it off, but to somewhat murky effect. Now comes Denis Villeneuve (Sicario, Arrival) with a Dune for the CGI age. His version certainly takes the novel seriously, and itself, too.

It’s unfailingly sombre, as if determined not be written off as merely Star Wars sprinkled with sand. Chalamet plays Paul Atreides, scion of a planetary dynasty given the contract to extract the priceless material “spice” from the deserts of arid planet Arrakis. That pallid youth Paul may be the foretold Messiah who will one day bring about the liberation of Arrakis’s desert-dwelling Fremen – could this be any more of a “white saviour” fantasy?

Still, it seems that Villeneuve won’t get round to grappling with that problematic issue until Episode 2, if it ever gets made (the most ominous closing words in recent cinema: “This is just the beginning”). This film gets as far as landing Paul and his mother (Rebecca Ferguson) in the desert: ’til then, we get a lengthy caravanserai of austere set pieces, a beautiful platform for Patrice Vermette’s extraordinary designs, and various striking performances. Stellan Skarsgård is the levitating villain Baron Harkonnen; Charlotte Rampling is her icy best as an intergalactic Mother Superior; Josh Brolin and Jason Momoa are burly bruisers with beards.

The design will feed earnest discussions of this Dune being indirectly about the Gulf War, and perhaps it’s only by taking the film at earnest face value – or as an imposing, if soulless objet d’art – that one can really get the most from it. Nowhere near as enjoyable as Villeneuve’s inspired Blade Runner 2049, Dune is an achievement for sure, but watching it is rather like having huge marble monoliths dropped on you for two and a half hours, to the resounding clang of a Hans Zimmer score