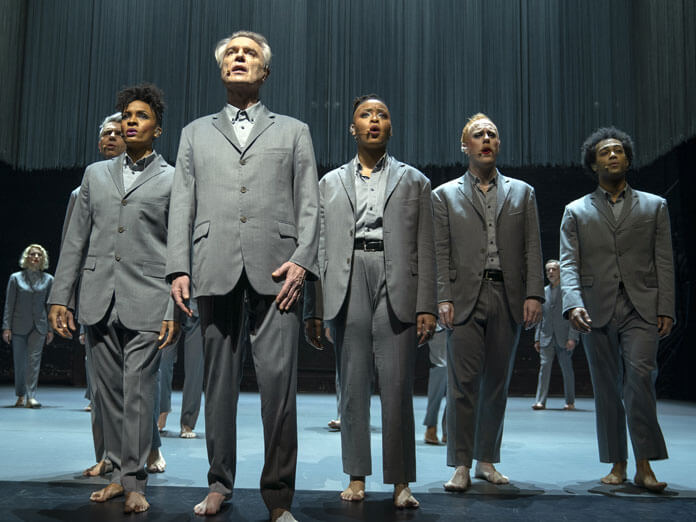 A dazzling blend of greatest-hits show, avant-garde ballet and timely political statement, David Byrne’s 2018 American Utopia tour was a natural candidate for an extended Broadway encore. Shot in late 2019 and premiered on HBO in October, Spike Lee’s film of Byrne’s sold-out Hudson Theater run is respectfully faithful to the stage performance, with a few deft embellishments.

Stripping the stage down to an artfully minimal art-space, Byrne is joined by a multinational ensemble of 11 bare-footed singer-dancer-musicians, all dressed in stylishly egalitarian grey uniforms. Played on portable wireless instruments in thunderously percussive marching-band arrangements, rebooted Talking Heads classics including “I Zimbra” and “Once In A Lifetime” sound kinetic and vital, while more recent Byrne tracks like “Lazy”, “One Fine Day” and “I Dance Like This” span the musical spectrum from clubby house to gospel-pop to avant-funk. The choreography, by long-time Byrne collaborator Annie-B Parson, is playfully wonky and frequently hilarious, but impressively athletic too.

More importantly, Lee responds in subtle but inspired ways to Byrne’s pro-diversity message. The singer’s full-band choral cover of Janelle Monae’s Black Lives Matter protest anthem “Hell You Talmbout” was always a bold inclusion, but Lee embellishes it here with photographs showing each of the African-American victims named in the lyric, adding some notorious recent cases including Breonna Taylor and George Floyd. Some of these brief cutaways include surviving family members: a simple, powerful, cinematic flourish that amplifies the song’s impact without disrupting the show’s flow.

As both stage performance and documentary, American Utopia inevitably invites comparison to Jonathan Demme’s beloved 1984 Talking Heads concert film Stop Making Sense. To the credit of everyone involved, these parallels do not feel hyperbolic. In what may even be a sly homage to Demme, Byrne departs from his usual Broadway format to perform a final uplifting encore of “Road To Nowhere” against bare theatre walls before leading his band on a euphoric victory lap through the crowd. A handsome record of a career-topping, jaw-dropping spectacle, American Utopia is a glorious celebration of music as unifying force, joy as an act of resistance.