A collaboration at once overdue, and worth the wait... 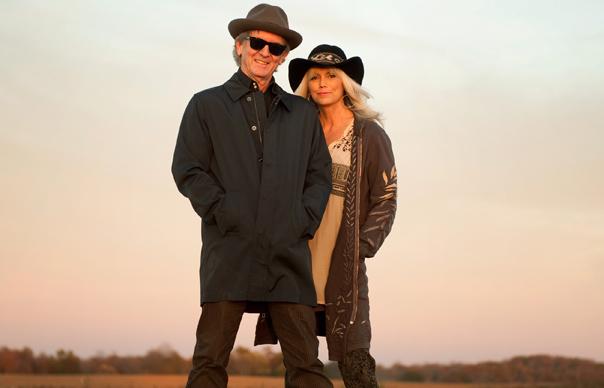 A collaboration at once overdue, and worth the wait…

This album has been an unrealised ambition for Harris and Crowell since 1974, when Harris was choosing tracks for her solo debut, Pieces Of The Sky. The producer overseeing Pieces Of The Sky, Brian Ahern, played Harris a track by budding Texan songwriter Rodney Crowell. It was called “Bluebird Wine”, and it became the opening track of the album.

“Bluebird Wine” is also the eighth track on the Brian Ahern-produced Old Yellow Moon. It’s not quite as purchasers of Pieces Of The Sky will remember it. Crowell has taken the lead vocal back and tinkered with the lyrics, turning the sloshed youthful idlers depicted in the original into more purposeful middle-aged workaholics. This revision is one of the more obvious manifestations of a theme that percolates gently throughout “Old Yellow Moon”, of attempting to apply the lessons learnt to the time there is left.

Old Yellow Moon is not, however, a sombre anticipation of mortality akin to the American Recordings series of Crowell’s one-time father-in-law Johnny Cash. The general tone of “Old Yellow Moon” is of faintly rueful happiness at being here, doing this. The opening track, the subtly swinging “Hanging Up My Heart”, first appeared on the Crowell-produced cash-in album Sissy Spacek made after her turn as Loretta Lynn in “Coalminer’s Daughter”. The original is an iteration of a well-worn country template: the too-many-times-bitten Romeo/Juliet announcing that they can’t be bothered anymore. In these two well-weathered voices – a compliment – it sounds like relief at having grown too old for all that nonsense.

Similar redemption is wrung from a stately version of Allen Reynolds’ “Dreaming My Dreams”; Crowell’s “Here We Are” executes the same sort of metamorphosis. This first appeared on George Jones’ 1979 duets album My Very Special Guests, sung by Jones and Harris, a weary waltz of on/off lovers who’ve resigned themselves to a semi-grateful collapse into each other’s arms. The “Old Yellow Moon” version is recalibrated as a slightly gloating acknowledgement of the terrible disadvantage suffered by the young: they don’t have any old friends.
Andrew Mueller