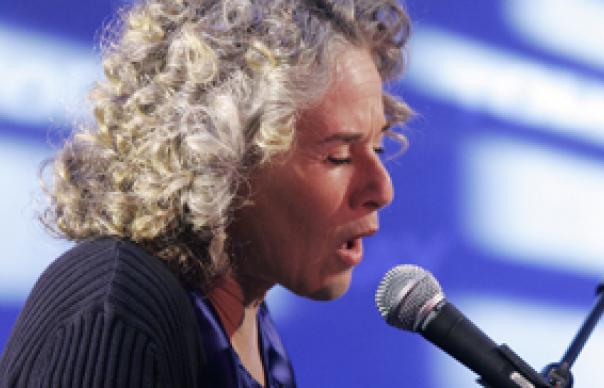 From Cole Porter to Smokey Robinson to Cathy Dennis, the arts and wiles of the multi-successful songwriters are as recondite as witchcraft. I mean, you try doing it. Would you look for inspiration, or would it find you? Consider a young Brooklyn wife-and-mother in the early 1960s, commuting with her husband to a Broadway publishing office, to write universal pop classics in a cubicle just big enough for a piano. Were they clock-punchers or geniuses? Toilers or alchemists?

Then there’s the way you imagine an album like Tapestry being written. Alone in a house on a California ridge, mid-afternoon, with a cup of coffee going cold on a piano, and a cat watching from a cushion. The pianist in both scenes, of course, is Carole King. The hits she wrote with Gerry Goffin in the Brill Building (including “Will You Love Me Tomorrow” for The Shirelles and “Up On The Roof” for The Drifters) combined accessible messages and dramatic hooks, and reached out to both blacks and whites in Kennedy’s America. But it was the songs she wrote for Tapestry, in 1970-1, that made Carole King a legend.

Tapestry, the second solo album of her career, which is reissued here in a 2-CD Legacy edition with an extra ‘live’ disc, featured the hit singles “It’s Too Late” (a US Number 1) and “So Far Away”, besides famous tunes like “I Feel The Earth Move”, “You’ve Got A Friend” (a US chart-topper for James Taylor) and “Smackwater Jack”. Constant airplay for these tracks helped Tapestry to become a bestseller, then an über-phenomenon with unprecedented market reach. Instantly established as a landmark in the singer-songwriter genre, and still an enduring favourite in many record collections today, it has sold an estimated 25 million copies, and was the top-selling solo album in history until Michael Jackson’s Thriller overtook it.

It’s arrival was not foreseen. The trajectory that led Carole King from co-writing Little Eva’s “The Loco-Motion” to sitting on top of the Billboard charts with Tapestry looks confusing with hindsight. In 1967, Aretha Franklin had taken Goffin-King’s sexual discovery anthem “(You Make Me Feel Like A) Natural Woman” into the US Top 10, confirming again the duo’s eminence in soul/R&B music. Soon afterwards, King separated from Gerry Goffin (although they continued to write together for a time) and made a life-changing move to Los Angeles. In Sheila Weller’s revealing new book, Girls Like Us: Carole King, Joni Mitchell, Carly Simon And The Journey Of A Generation (Ebury Press), Carole is depicted as a woman on a personal voyage – a single mum in late-’60s California, experiencing new romances, new horizons, new uncertainties – while playing the role of a wise matriarchal figure in a community of musicians living the surrogate family dream in Laurel Canyon.

In the Canyon’s singer-songwriter heartland, introspection (and its by-product, confession) were fast becoming the prime subject matter for lyrics, love songs – even whole albums. James Taylor’s Sweet Baby James charmed America in 1970. Joni Mitchell’s Blue would shortly raise the bar for all who followed. In between them came Carole King’s Tapestry.

Her debut solo album, Writer (1970), had been a commercial flop. Ambitiously arranged in places, it’s nevertheless aged well as a superior album of lesser-known Goffin-King songs. But Tapestry made a few changes. Carole started writing her own lyrics. Her label boss Lou Adler produced the album himself. He placed King’s piano upfront (it had been submerged by guitars on Writer), and asked the musicians to keep things ‘light’. When guitarist Danny “Kootch” Kortchmar had played a solo on Writer’s “Raspberry Jam” it had been a dizzy-fingered tour de force. When he played one on Tapestry’s “It’s Too Late”, it had an effortless, easygoing swing.

Tapestry’s appeal works on several levels. It has a highly attractive pop-soul sound, in which King’s honest, yearning voice blends with her own piano, and also with Kortchmar, bassist Charles Larkey (who had become King’s second husband in 1970) and drummers Joel O’Brien and Russ Kunkel. The 12 songs are melodic, wistful, and clearly written by a sensitive person who’s a bit unsure of the way ahead. There’s a dose of harmless hokum here and there (“Smackwater Jack”), but other songs are serious reflections on family break-ups and emotional displacement. Keep in mind, too, that the opening and closing tracks – “I Feel The Earth Move” and “(You Make Me Feel Like A) Natural Woman” – contain two of the most evocative and well-known metaphors for the female orgasm. Tapestry is not, as some would have it, pop’s equivalent of The Mary Tyler Moore Show.

Unlike its low-selling predecessor, Tapestry had a major effect on the world. In her aforementioned book, Sheila Weller quotes Cynthia Weil – herself the female half of a celebrated ’60s songwriting duo – on the subject of Tapestry’s staggering crossover appeal: “Carole spoke from her heart, and she happened to be in tune with the mass psyche. People were looking for a message, and she came to them with a message that was exactly what they were looking for, what they were (itals)aching(itals) for.”

The message was subliminal, not overt. Indeed, its cloudiness (a vague, abstract sense that life is something you feel your way carefully through) is almost certainly what made it persuasive to millions – a bit like an ambiguously-worded horoscope, but with a lot more sincerity. You only have to hear the delighted screams of the audiences on the disc of live recordings from 1973 and 1976, as King begins a solo piano rendition of “So Far Away” or “Home Again”, to realise how besotted with these songs people were. And some of those screams are from men.

In a post-Mariah, post-Morissette world, no female pop singer would risk expressing herself in Carole King’s unaffected style today, (itals)sans(itals) neurotic yodelling or listen-to-me-dammit emoting. Whatever she confessed or kept private, King’s natural magic has disappeared and been replaced by guile. This, too, is another reason to keep returning to Tapestry; it makes other singer-songwriters, even some of the great ones, sound ever so slightly implausible.