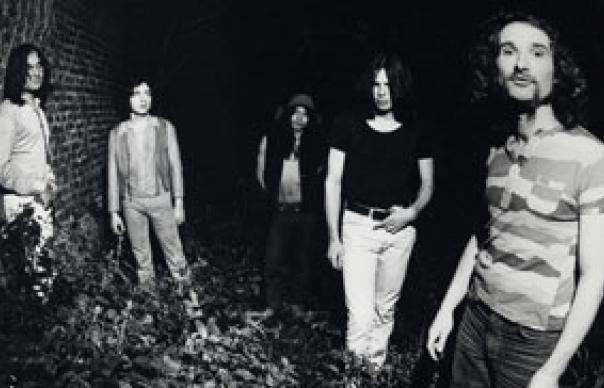 “The castle discovered with the excavation rectangular four bay window towers was 25 metres about 11 times and had a kennel offshore to the north.” (Make allowances: it’s a German-English translation website.) “Werner von Vlatten, a clerk between 1366 and 1394, might have inhabited them. His son Wilhelm, after a division, owned the castle.” (Here comes the relevant bit.) “In 1968–9 the rock group Can furnished their studio here.” (The quintet based themselves at the castle for three years, before relocating to a disused cinema at Weilerswist.)

The castle – Schloss Nörvenich in North Rhine-Westphalia – was where Tago Mago, surely Krautrock’s greatest double album, was recorded over several months in 1971. It’s a record with a powerful reputation, and not just because it inspired bands like Radiohead and PiL. Links with Satanism and witchcraft have been suggested over the years; we’ve read of Can learning “forbidden rhythms” from West Africa, and having a fascination with Aleister Crowley. Irmin Schmidt’s grim bellow on “Aumgn”, as he intones as if from a coffin, is as chilling as rock vocals get, akin to an encounter with a cloven-hoofed goat-creature. The word ‘aumgn’ is derived from Om (or Aum), the sacred incantation in Hinduism and Buddhism, but it was also, according to his disciples, “Crowley’s ultimate word of power” – the word he believed would enable him to rule the planet by magick. Schmidt stretches out the two syllables (‘aum-gn’) for 20 or 30 seconds at a time, while a violin saws away and a double bass circles menacingly like the Jaws theme. The music loses all inhibition, building orgiastically to a frenzy.

The rhythms on Tago Mago; they get into your eyeballs. When drummer Jaki Liebezeit first invented the hypnotic beat that became the foundation for “Halleluhwah”, it caused such a strong reaction in guitarist Michael Karoli that he began hallucinating. He begged Liebezeit to keep playing it, and we can empathise; it’s a groove that seems to suck our minds into its sorcerous clutches. Liebezeit, one of the acknowledged masters of the drums, could create these mesmerising patterns at will. On “Mushroom” we hear him judging the weight of his foot-pedal like a chemist measuring drops of liquid from a beaker to a flask. On “Paperhouse”, he sensually tickles the drowsy 6/8 beat in the opening bars, only to beat his drums and cymbals viciously when Karoli leads the charge into squealing acid-rock. At times, Can reveal a technical expertise on a par with prog-rockers like King Crimson, but Can always placed technique second to the communal responsibilities of improvisation. Schmidt, for example, would take his hands off his keyboards if he felt he had nothing to add. The music on Tago Mago was derived not from songwriting but from extensive jamming at the castle, which bassist Holger Czukay edited down into shorter pieces. Not too short, though. Even abridged, “Aumgn” lasts more than 17 minutes, and “Halleluhwah” runs to 18-and-a-half.

It’s a fool’s errand to try to describe the styles and genres that Can touch on here; suffice to say that if there were an HMV category called Shockingly Beautiful And Pulsatingly Thunderous Space-Jazz-Concrète, Tago Mago would be at the front of the racks every time. Invoking and evoking just about all the spontaneity and scariness that you’d want from rock’n’roll, Tago Mago can offer experiences as spellbinding as the sequence that originally comprised side one (“Paperhouse”, “Mushroom”, “Oh Yeah”), or can be so extreme that you feel yourself under attack by maniacs. Not everyone, certainly, will carry a torch for “Peking O”, an 11-minute detour into drum-machine lunacy and babbling nonsense. Then again, “Peking O” is followed by its polar opposite, “Bring Me Coffee Or Tea”, a weird folky lullaby in the same ballpark as “Willow’s Song” in The Wicker Man. You learn to expect the unexpected with Tago Mago. Just as you think you’ve got a handle on “Mushroom” – singer Damo Suzuki must be describing a psilocybin trip when he speaks of being “born” and “dead” when he sees the “mushroom head” – something about his odd phrase “my despair” nags at you. Mushrooms? Despair? Then you remember that Suzuki was a child of 1950s Japan, when the country was rebuilding itself after the mushroom clouds of 1945. Dark riddles, occult practices, atom bombs. Perhaps, as some have suggested, this was the preferred reality – the only reality – for four Germans and one Japanese born either side of World War II.

To mark its 40th anniversary, Tago Mago (which, like all Can’s early albums, was remastered in 2004), is being reissued with a bonus CD of live material from a Cologne gig in June 1972. Previously available on the bootleg, Free Concert, the tracks are “Mushroom”, “Spoon”, “Bring Me Coffee Or Tea” and “Halleluhwah”. The recording is in mono and the sound quality is passable, but not great. “Spoon”, all 20 minutes of it, has a dramatic performance from Suzuki as it nears its climax: first he starts urging “you gotta love me”, then he starts screaming it, at which point the momentum is halted by Karoli’s feedback and the music is hesitantly reshaped into “… Coffee Or Tea”. “Halleluhwah” is surprisingly laid back to begin with, but as funky as The Meters, with Liebezeit in mind-boggling octopoid form as usual. Schmidt organ-solos like a man demented as the track fades.

In 1989, I got a chance to ask Can about Tago Mago. Karoli, a lovely man, sat next to me in the restaurant, enthusing about Liebezeit and explaining that Suzuki sings “searching for my black dope” in “Halleluhwah” – “because he’d lost it, you know”. Schmidt, a grumpy intellectual, told me that Can had revealed their ‘secrets’ only once, to a journalist in 1975, and she’d phoned up in a panic because that part of her cassette was inexplicably blank. We went back to a house in Notting Hill where Schmidt groped his wife on the settee all night, and Karoli bopped to Chic records. An unassuming guitar hero, he died in 2001.
David Cavanagh