Buddy Guy – The Blues Is Alive And Well

The Chicago blues legend keeps the form in rude health 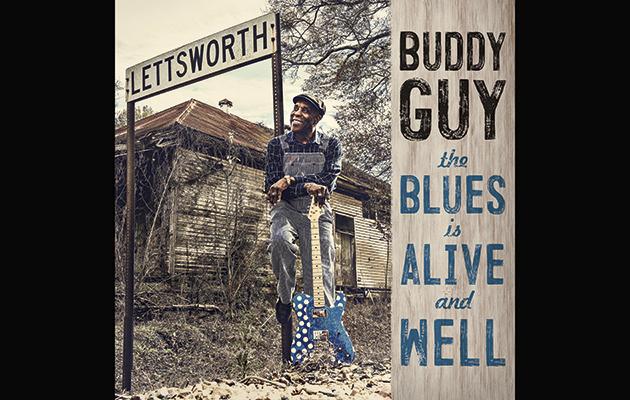 Buddy Guy opens his latest studio album with a frank admission followed by a chilling plea. “I’ve been mighty lucky, I’ve travelled everywhere,” he sings. “Made a ton of money, spent it like I don’t care.” It may initially sound like a boast, but Guy transforms those lines into something very different, something much more rueful when he adds, “A few more years  is all I need right now.”

If the blues makes an art of pleading – for love or sex, for mercy or leniency, for wealth or glory, for salvation or simple understanding – then Guy’s request is  all the more sobering for coming from  a man who knows that he has more time behind him than in front of him. He brings every one of his 82 years to bear  on the song, lending gravity to his request for just a little more time on Earth. And yet, even as his band pounds out a matter-of-fact beat like they’re ticking off his numbered days, Guy never sounds like the octogenarian that he is. His voice is robust and smooth, especially when he hits that high note on “please, PLEASE, Lord”. His guitar playing is fluid as ever, inventive and impossibly dextrous, and he riffs throughout “A Few Good Years” with the punchy determination of a man who won’t go down without a fight.

Mortality has been on Guy’s mind for most of the 21st century, as he has settled more comfortably into his role as the last surviving master of Chicago’s electrified blues scene. Born in rural Louisiana during the Great Depression, self-taught on a two-string guitar, apprenticed to a regional bluesman named John ‘Big Poppa’ Tilley, Guy developed an intense and exuberant playing style that favoured ostentation and understatement. In the late 1950s  he left the South for better opportunities in Chicago, where he quickly became  a popular live performer and sideman  for Howlin’ Wolf, Muddy Waters and many others.

Guy became a favourite of blues-rock players in the 1960s and 1970s, lauded as a formative influence by Jimi Hendrix, Eric Clapton and The Rolling Stones. He played with most of his acolytes during their heyday, and over the years they’ve returned the favour, adding crossover cameos to his recent albums, including The Blues Is Alive And Well. Mick Jagger blows a respectable, if undistinguished, harmonica on “You Did The Crime”, and James Bay whines his way through “Blue No More”. This kind of cameo can be like a blurb on a book, more a celebrity endorsement than a real collaboration, so credit to Keith Richards and Jeff Beck for staying out of Guy’s way on the ebullient jam “Cognac”. He barks out orders to them, cajoling them to keep up, to play harder, and the octogenarian takes no small delight in schooling these septuagenarian youngsters.

Guy is too imaginative a player and too bold a personality to let any of these rock stars steal his show. Working again with Tom Hambridge, who has produced every Buddy Guy record for the last 10 years, the bluesman presents a survey of the form, interspersing rave-ups like “Bad Day” and “Guilty As Charged” with mid-tempo laments like “Ooh Daddy” and “When My Day Comes”. He stretches out into these songs, inhabiting them comfortably and casually, almost always finding a way to make the familiar sound fresh. “Selling Whiskey” cribs its staccato guitar and slinky groove from David Bowie’s “Fame”, as though the song’s illicit commercial enterprise garnered him more celebrity than playing the guitar ever did.

The Blues Is Alive And Well ends with “Milkin’ Muther For Ya”, a short but elaborate dirty joke and an odd coda after the heavy sentiments on the back half of the album. “Somebody Up There” is a grizzled rumination on racism and violence, with a rolling, tumbling riff that culminates in one of Guy’s fiercest solos. And “End of the Line” finds him alone up on stage, nearing the end of his set and wondering where everybody went: “I’m the last one to turn out the light, I’m the last one to call it a night.” Especially on a collection that opens with “A Few Good Years”, the song carries a heavy gravity despite the sympathetic Muscle Shoals Horns and his declaration that “I won’t behave!”

Guy is not merely one of the greats of Chicago blues; he’s the last conservator of the form, and he does not take that responsibility lightly. “I promise ’til the day I die,” he testifies, “I’m gonna keep these blues alive.”