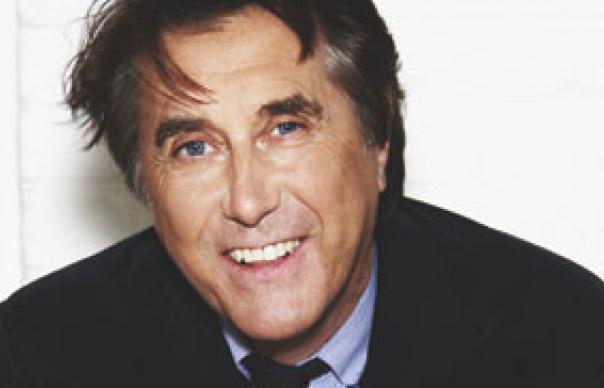 “Take me on a rollercoaster / Take me on an airplane ride…” From the start Bryan Ferry was bewitched by the exotic glamour of pop, its promise of some fabulous elsewhere, “far beyond the pale horizon, some place near the desert strand”.

But if he once conjured with the contradictions of dream homes and heartaches, in later years he seemed to elide the difference between the real and make-believe and take refuge in misty never-neverlands: Avalon, Mamouna, the Hollywood Casablanca of “As Time Goes By”. On the face of it Olympia might be the latest station on this wistful tour: vaguely redolent of deco movie palaces or even a Leni Riefenstahl-style propaganda spectacle. Until you realise that it’s likely a more prosaic reference to the West Kensington neighbourhood, all exhibition halls and office blocks, where you find Ferry’s studio.

And indeed rather than some great departure, Ferry’s first album of original material since 2002’s Frantic sticks pretty close to home. Neurotically so: just like Frantic, Olympia draws heavily on material originally recorded back in 1996 with Dave Stewart (conspicuously absent from the stellar list of names – Scissor Sisters, Eno, Nile Rodgers, Jonny Greenwood, David Gilmour – highlighted in the advance publicity). At least three tracks here – “You Can Dance”, “Alphaville”, and the closing “Tender Is the Night” – date from those sessions, while the Scissor Sisters collaboration, the coyly titled “Heartache By Numbers”, was apparently recorded over five years ago.

And yet Olympia was trailed with such promise. First DJ Hell had stripped down “You Can Dance” to a chilly techno pulse, recasting Ferry as the vampiric crooner we once knew from Roxy tracks like “Ladytron”. Then Groove Armada hit upon one of their seemingly random moments of genius, cutting up Ferry with Truffaut and reworking “Shameless” into a brooding electraglide in blue. Finally Leo Zero joined the dots from Godard to Daft Punk, rerecording “Alphaville” as relentless Parisian funk.

All three versions worked brilliantly at reclaiming Ferry as the founding retrofuturist of British avant-pop, but none appear on the album as it now arrives. Instead “You Can Dance” (which in the 1996 version available on bootlegs was actually a curious essay in drum and bass), is draped in the gilded, otiose funk that’s been Ferry’s signature soundworld since 1985’s Boys And Girls – perfectly rendered in the accompanying video, which is like if Gustav Klimt had directed a Robert Palmer promo. In many ways it’s an awesome production – nobody except Sade dares to make records that sound so impeccably imperious any more. But listen to it against the Hellish remix and its finery pales.

The tendency to overload and overwork the song, the result of too many hours of Olympian fretting, comes to a head on the cover of Tim Buckley’s “Song To The Siren”. The track credits five guitarists, including Nile Rodgers, Phil Manzanera, David Gilmour and Jonny Greenwood – Eric Clapton and Johnny Marr were presumably out of the country – three drummers, a percussionist, and Brian Eno playing some obscure synth, and the result is a stupendously overblown gas giant of a cover, one that’s simply blown away by Liz Fraser and Robin Guthrie’s spare Mortal Coil version.

Ferry clearly realises this – it’s why he enjoys his breezy cocktail jazz outings and bar band Dylan dalliances. And the best tracks on Olympia benefit from a certain lightness of touch: “Me Oh My” fans the embers of torch song – “Everything I care about is gone/I wonder why?” – and makes a virtue of the husk of Ferry’s lunar croon. And the closing “Tender Is The Night” taps into Ferry’s familiar F Scott Fitzgerald feel for fading romance; like Gatsby, enchanted by the green light of promise but, like “Boats against the current/Borne back ceaselessly into the past”.

Olympia could do with a little more of that future-facing yearning, the contemporary spirit that crackled through the remixes, to remind us of times when Ferry seemed as much a figure from our future as from our recent past.
Stephen Trousse