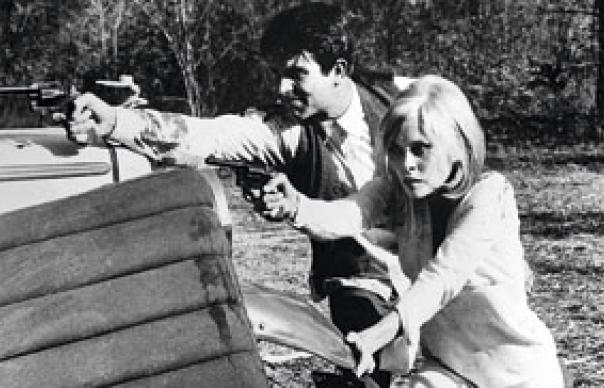 Forty-one years on, Bonnie And Clyde may not seem as shockingly divisive as it did at the time of its release – the era of Vietnam, panic in Detroit, and racial tension- but it remains a remarkable piece of cinema. Yes, in the wake of Bugsy and Dick Tracy, it’s harder to identify with Warren Beatty‘s performance as the charismatic outlaw Clyde Barrow, but Arthur Penn’s direction has little to do with realism anyway. It’s a story about myth and fame, and can be viewed now as a companion to The Assassination Of Jesse James By The Coward Robert Ford. Both films take their cues from the newspaperman in The Man Who Shot Liberty Valance who told James Stewart, “This is the west, sir. When the legend becomes fact, print the legend.”

Bonnie And Clyde is a myth about a myth: it takes the story of the depression-era bank robbers, and recasts them as anti-establishment rebels. The same process was later applied to the filmmakers. Beatty, acting as producer, got the film made almost against the wishes of the studio, and worked a deal that delivered a huge slice of the profits. As the studio system collapsed, giving way to the thrills, spills and bellyaches of the new Hollywood, Time magazine was hailing Bonnie And Clyde as the movie of the year on a cover designed by pop artist Robert Rauschenberg. It tantalised readers with the promise: “The New Cinema: Violence… Sex… Art.” Never mind that the magazine had initially dismissed it as “a strange and purposeless mingling of fact and claptrap that teeters on the brink of burlesque” (Newsweek was even less charitable, declaring it: “a savage shoot-’em-up for the moron trade”).

Well, we know all about shoot-’em-ups for the moron trade now, and Bonnie And Clyde doesn’t look like one. True, the slow-motion finale would be taken to new levels by Sam Peckinpah, and, yes, the camera does linger as bullets puncture flesh, but in the age of Rambo this concentration on the moment of wounding seems almost restrained. If Penn’s intention was to shock, it was because he wanted those gunshots to hurt. Prior to Bonnie And Clyde, cinematic bullets caused their victims to fall down dead. Arthur Penn aimed to capture the hurt, so he ran several cameras at different speeds to catch the splashes of skin and gristle from every angle: gore, yes, but balletic gore. One of the bloodiest shots – the top of an actor’s head being blown off – was designed to echo the assassination of JFK. This wasn’t aimless violence. It hit the target.

As for sex, Time’s “brink of burlesque” suggests more titillation than the film contains. Yes, Faye Dunaway is never less than translucently beautiful as Bonnie Parker, and it’s true that she behaves more like a 1960s model than a 1930s moll. But it’s an oddly chaste film, as Clyde is mostly impotent, even when being orally-serviced by Bonnie. He was bisexual in the original script, but that proved a taboo too far for 1967. It’s not clear who objected: some say Penn removed the bisexuality for fear that the characters would seem like freaks, some suggest Beatty wasn’t happy with it, and others credit script doctor Robert Towne with an act of literary surgery.

There’s much else to celebrate. Gene Wilder makes his screen debut as an undertaker, and Gene Hackman burns up the screen as Clyde’s brother (“Take a good look, pop. I’m Buck Barrow.”) It would have been a different story if Beatty had followed his original plan, and cast Bob Dylan as Clyde, but his spirit made it into the film in the performance of Michael J Pollard, who decided that the gang’s mechanic should take his accent from Blonde On Blonde.

It feels, now, like a period piece, but that doesn’t lessen the boldness of the filmmaking. Mostly, it works by confounding expectations, serving up ultraviolence in the style of the Keystone Cops, and suggesting that the Barrow gang’s insouciance in the face of authority could make them immortal. Beatty also gets to deliver one of the great lines of cinematic rebellion, when asked where he’s going. “At this point we ain’t headin’ to nowhere,” he says. “We’re just runnin’ from.”