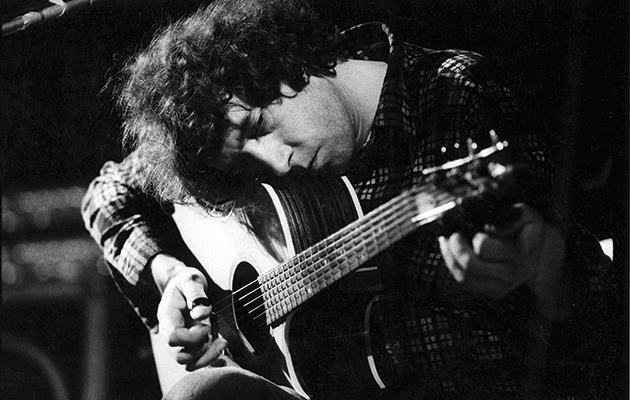 What is it with folkies and birds? Songs hymning birds and flight are legion in pop, but most merely use our winged friends as a symbol of longing and liberty. Folk singers, meanwhile, like to get particular, to single out species and project an inner life on the gull of their dreams. Alasdair Roberts’ “Waxwing” for example, or songs by David Rotheray, Jim Causley or The Imagined Village’s Simon Emmerson. Twitchers all.

So was Bert Jansch, whose “Blackbirds Of Brittany” (a fundraiser single for the RSPB) and “Bird Song” are stand-outs in the oeuvre. Folk’s connection to birds is obvious enough, the wellspring of tradition being rural and infused with nature. The 18-minute title track of Avocet, for example, has its genesis in the centuries-old “Cuckoo”, a commonplace song but one that obsessed the much-missed British folk pioneer, whose heavily elaborated version took months of development.

Jansch had finally taken to playing the piece live with bassist Danny Thompson and fiddler/flautist Martin Jenkins when the trio took to the road in 1977. It was an opportune gap in their careers, with Jansch’s Conundrum project a busted flush, Thompson off-duty from John Martyn and Jenkins a perfect available accomplice. With punk and new wave raging overhead, the only game in town for folk was the live circuit, where Scandinavia had long been a second home.

When Jansch’s Danish manager, Peter Abrahamsen, heard “Avocet” live he financed an album, with the title track occupying one vinyl side. Four other instrumentals that Jansch had accumulated were added, plus one from Jenkins, each named after a sea or wading bird, and the record was released in 1978 on Abrahamsen’s Ex-Libris label, arriving, tardily, a year later on UK Charisma.

The album is thus something of a curio in Jansch’s career, yet one that was especially close to his heart. You can see why. Jansch himself is on peak form, his rapport with his bassist effortless after their years together in Pentangle, while Jenkins does all that was asked of him in what Colin Harper’s insightful liner notes make clear was a meticulously prepared session. Jansch knew what he wanted. “He had it clear in his head how each piece could flow together in continuity, in terms of key rather than tempo,” recalls Jenkins.

There was real care, too, in the production at Copenhagen’s Sweet Silence Studios, whose clarity and warmth have been winningly remastered for this new edition. A photograph from the sessions shows a shaggy, beaming Jansch at the console surrounded by a smiling team.

“Avocet” is the album’s wonder, with the antique air reprised in assorted guises, at times elegant and almost mediaeval, at others driving and jazzy, while Jenkins’ violin has an almost futurist quality. This is Jansch leading us a merry dance, and his guitar is at the heart of everything; restless and intricate, string-snappingly fierce and gently otherworldy. Thompson, likewise, oscillates between thrumming overdrive and sparse statement. It’s 10 minutes before anything like a conventional folk approach arrives, with Jenkins adding flute, before a final, joyous section that reminds us that while the song is named after “a long-legged wader, charismatic and graceful”, something of the greenwood clings obstinately to it.

“Lapwing” couldn’t be more different. For starters it’s Jansch at the piano, it’s short, it’s in waltz time and its tune is etched among cryptic flurries that hover midway between jazz and modern classical. A two-minute delight. “Bittern” sounds the changes again, a skipping blues played on acoustic, though its serpentine melody is infused with skirls of electric guitar and driven by busy bass parts that owe more to Charlie Mingus than to the “elusive, secretive heron” after which the piece is named. Meandering and lovely.

“Kingfisher” is more contemplative, its melody played on fiddle while Jansch and Thompson compete on string-snapping techniques. Jenkins’ “Osprey” slows down further, led by a violin melody that carries something of the power and menace of its subject. Jansch contrasts with impatient picking, shifting into unexpected jazz chords. “Kittiwake” is the simplest piece here, another seemingly effortless little melody intricately explored.

It is, as Colin Irwin puts it, “gloriously timeless music”, so out of time that Avocet re-arrives 30 years on sounding fresher and more adventurous than most of what’s presently rolling off the music mills of any persuasion; folk, jazz, classical. Like its creator, Avocet answers to all yet none of those names. Grounded in tradition, deeply schooled in the art of folk-picking that lay behind so much of pop’s glory years (‘The White Album’, The Byrds and Zeppelin wouldn’t have existed without it), a songsmith and a composer who expressed admiration for classical guitarist Julian Bream, Jansch transcended genres. On Avocet, his vision found a point of perfection.