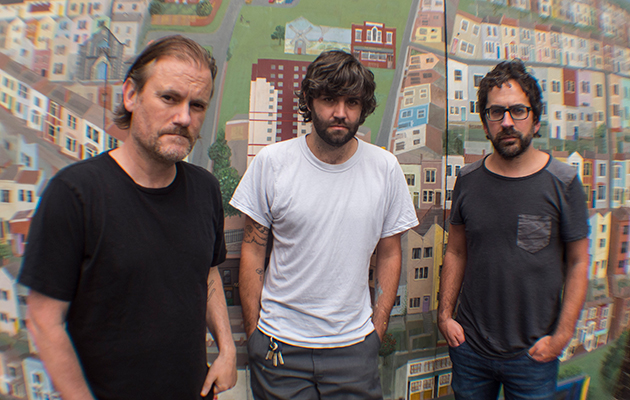 A consistently entertaining presence on the social networking site Twitter, over the years Geoff Barrow has expended no little energy on upbraiding critics who refer to his group BEAK> as a “side-project”. Of course, it’s understandable why the Bristol band might be regarded as in some way secondary. Barrow is best known as the musical force behind Bristol’s Portishead, whose 1994 album Dummy scooped the Mercury Music Prize and characterised the urbane, bluesy sound of trip-hop (another term that Barrow despised).

Still, let’s look at it for a minute from BEAK>’s perspective. In the decade that’s passed since Portishead’s last album, Third, the trio – Barrow on drums, Robert Plant collaborator Billy Fuller on bass and since 2016, Will Young on electronics – have released three albums, a brace of EPs, and played some 300 gigs, touring increasingly large rooms across Europe and America. While we shouldn’t entirely discount the possibility another fantastic Portishead album is quietly taking shape behind the scenes, we should at least consider that at this stage, the so-called side-project is the one using up the most of Barrow’s creative energies.

It’s worth pointing out, because with the cryptically named >>>, BEAK> may have finally come up with an album that feels like the main event. Their music to date – a murky, atmospheric sound drawing from dub, Krautrock and soundtrack music – has at times given the impression of a bit of a work-in-progress, its first-take, best-take spirit an antidote to Portishead’s stultifying perfectionism. Barrow once described the 11 years spent recording Third as “fucking tense… we could drift for months and months”. By contrast, BEAK>’s debut album came together in 12 days in a rehearsal room in Bristol, the band recording live with no overdubs.

>>> doesn’t find BEAK> ripping up the rulebook, exactly. The eerie organs, the chunky motorik rhythms, the prevailing sense of oppositional spikiness – all remain present and correct. But it does feel like a progression, with a new clarity and compositional complexity running through its grooves. “Brean Down” comes on like an English take on the occult Krautrock gloom of Can’s Ege Bamyasi, Barrow tossing in skilful Jaki Liebezeit tom fills around the bristly guitars, and muttering obscure critiques (“We don’t like your music cos it ain’t upon the radio”). “RSI” harks back to the pulsating motorik disco of Stereolab, with whom Beak> share a few loves – for Silver Apples, Neu!, and the distinctive burble of the Farfisa organ. Elsewhere, moments defy clear categorisation: see “Harvester”, with its languid countrifed guitar and bold string sweeps; or “Alle Sauvage”, a pressurised instrumental making a virtue of BEAK>’s compositional closeness, drums, bass and synth locked together like clockwork.

So BEAK> are finally nailing it as a band. But it’s useful to view >>> through another lens, too. In 2016, Beak> soundtracked a gloomy Belgian thriller named Couple In A Hole, and Invada -– the Bristol indie label that Barrow co-runs – has emerged as a key player in the popular niche of TV and movie soundtracks pressed to vinyl, with recent editions of Netflix thriller Stranger Things and Johnny Greenwood’s score to Lynne Ramsay’s You Were Never Really Here currently gracing shelves. A filmic quality has leaked into >>>. “The Brazilian” floats in on sci-fi synths before turning into a strutting bass groove that sounds like the signature tune of a swaggering antihero in a gothic spaghetti western. Other times, either by impulse or design, they echo earlier landmarks in experimental composition. “Abbots Leigh” – its name a reference to a sleepy civil parish west of Bristol – explores a nightmarish free improvisation, its simmering tension and savage bursts of sound not unlike the music Ennio Morricone’s Gruppo di Improvvisazione Nuova Consonanza were making in the 1970s.

It’s always been tempting to sift Barrow’s music with an eye for expertly chosen reference points. <<< doesn’t necessarily transcend them, but it does something pretty much as good – it accurately communicates the thrill of three friends together in a rehearsal room, working in perfect lockstep, making music of shared mind. Will they ever make an album with the dark majesty of Dummy, or Third? Jury’s out. Still, maybe that’s fine. Those Portishead albums had the torture of their creation writ through their grooves. On >>>, you get carried along by BEAK>’s sheer enthusiasm – cut adrift from their past, sealed off from expectation, existing entirely in the moment.