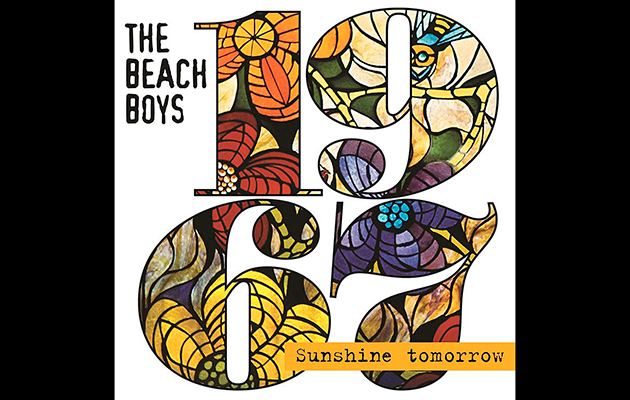 In 1967, as the sun shone down on Southern California, the roof fell in on The Beach Boys. In April, 20-year-old Carl Wilson, who’d been drafted to fight in Vietnam, was arrested by the FBI for failing to report for military duty. In May, his brother Brian formally abandoned work on Smile, the avant-garde masterpiece that was supposed to leave Lennon and McCartney for dust. When, a month later, an under-rehearsed Beach Boys pulled out of a headlining slot at the Monterey Festival, citing a lack of material, it was the cue for America’s rock cognoscenti to howl with laughter. Only eight months after stunning the world with “Good Vibrations”, The Beach Boys were now dismissed as cultural lightweights.

Their ability to take the blows and regroup in the face of adversity is the consistent subtext of 1967 – Sunshine Tomorrow, a 2CD and digital collection featuring more than 50 previously unreleased tracks recorded between June and November. Crucially, a line had been drawn under Smile, so these are not sophisticated pieces of music assembled painstakingly with the Wrecking Crew in expensive Hollywood studios. Instead, like a Michelin-starred chef re-learning how to boil an egg, The Beach Boys went back to basics, picking up guitars and basses, rearranging themselves into the beat group they’d once been, and building a cocoon-like reality for themselves in the living-room of Brian’s Bel Air home. Whatever the dilemmas facing them, nobody could accuse them of being unproductive. They made two albums in five months (Smiley Smile and Wild Honey) and even attempted a third – a live LP, Lei’d In Hawaii – before deciding that their all-too-candid performances, like the unsolved riddles of Smile, belonged on the shelf.

Though it contains some 18 minutes of outtakes from Smiley Smile, the key selling point of 1967 – Sunshine Tomorrow is its new stereo mix of Wild Honey, an album originally delivered to Capitol Records in mono. Wild Honey was more uptempo than the haunted Smiley Smile, reflecting the soul and R&B tastes of Brian and Carl Wilson, and it launched the Top 20 hit “Darlin’”, sung by Carl with irrepressible abandon at the upper limit of his range. In what must have been one of the scariest years of his life, his screaming, sock-it-to-me vocal sounds like righteous catharsis. Always a bit murky in mono, “Darlin’” bursts into bloom in stereo – as do other songs such as “Aren’t You Glad”, “Country Air” and “I’d Love Just Once To See You” – to reveal all sorts of secret passages and underground tunnels. Hearing Wild Honey in its full splendour, indeed, it may strike you that this modest little 24-minute album, far from being a half-baked throwaway (as critics at the time complained), is a rocking, rolling, fully-realised statement that heralds the sounds that lay around the corner for rock in 1968–9. The Beach Boys, you could say, were pioneering a post-psychedelic music while the Summer Of Love was still in full swing. And wouldn’t you know it, The Beatles’ “Lady Madonna” would get the credit.

Whereas history tends to tell us that Brian, having lost his race to let the world hear Smile before Sgt. Pepper, was reduced to a traumatised shell as a result, the outtakes and session highlights of Wild Honey – about 40 minutes of them – simply shatter that falsehood to smithereens. He sounds every bit his usual self: alert, good-humoured and completely in control. He wants the music to sound rustic; it’s not going in a minimalist direction due to any deficiencies in his production skills. The warm interaction between Brian and his band-mates on these recordings really does cast a much-misunderstood period of The Beach Boys’ career in a new light. Brian even hopped on a plane to Hawaii in August and joined them onstage for two concerts in Honolulu, his first with the band since 1964.

Sadly, the gigs they recorded in Hawaii weren’t impressive at all, and it’s a surprise that the surviving band-members have green-lighted the official release of some of the Lei’d In Hawaii tapes five decades later. With Bruce Johnston on bass and a general air of uncertainty prevailing, The Beach Boys sound like a garage band that formed in Hawthorne three weeks earlier. Dennis’s drumming is wobbly, and Carl’s guitar solos – in an era of Hendrix and Garcia – are a ham-fisted embarrassment. “Thank you very much for your sympathy,” quips Mike Love, the driest of emcees. The Beach Boys were right. Exposing this paper-thin act at Monterey would have been catastrophic.

Back in Bel Air, though, they found their feet once again at Brian’s place, singing infectious tunes about honey bees and the joys of fresh air (note: all three Wilson brothers lived in a constant fug of hashish) and distilling the essence of those golden voices, even at a time of great paranoia, into sweet soul music. Thus do young men, who appear to be going mad, do their utmost to stay sane.