The Ballad Of Buster Scruggs

The Coens’ series-turned-movie is a killingly droll triumph 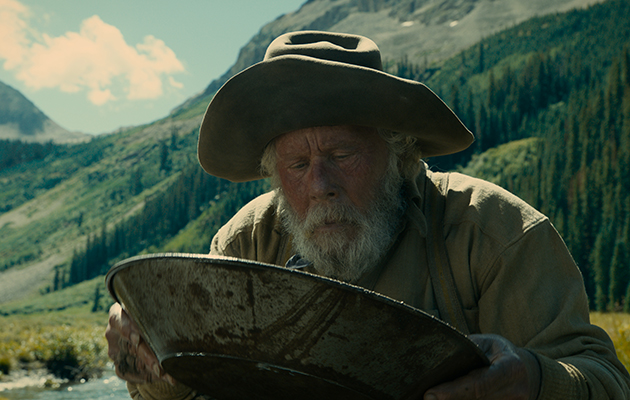 The Ballad Of Buster Scruggs is by turns many things, including whimsical, brutal, hilarious, violent, absurd, tragic and cheerfully nihilistic. It was originally intended by writer-directors Joel and Ethan Coen to be streamed as a Netflix series, six tales from the Old West about different ways of dying, all of them brutal. After shooting the individual episodes, however, the Coens decided they’d work even better as a full-length feature. So they turned them into a film, one of their best.

There are six chapters, each introduced by the turning of a page from a book of Western tales, that gleefully embrace classic genre tropes – the singing cowboy, charismatic bank robber, freak show huckster, the grizzled prospector, the wagon train, cantina shootout and perilous stagecoach journey – the Coens both honour and dismember. Their only previous period Western was a remake of True Grit stifled by reverence. Where they had earlier taken unfettered liberties with film noir, screwball comedy, the gangster movie, whatever, their take on the Western in that unhappy reboot was stylistically pedantic, as if they were unusually intimidated by cinematic tradition, where once they had redefined it. Buster Scruggs is a much wider film, less diminished by deference. In parts, it’s like Blazing Saddles directed by Sam Peckinpah.

It starts with the title chapter. Coens veteran Tim Blake Nelson is Buster, a singing cowboy in Gene Autrey drag. We first see him riding through a Monument Valley that’s rarely looked so ethereal. He’s atop a white stallion, strumming a guitar, crooning “Cool Water”. From his aw-shucks straight-to-camera chat, he seems an affable sort of cowpoke. Then the killing starts, and stops only when Buster draws against a faster gun. At which point, he departs the scene to the strains of “When A Cowboy Trades His Boots For Spurs”, written by Gillian Welch and Dave Rawlings, in a sequence of transcendent absurdity.

“Near Algodones” stars James Franco as a bank robber whose lynching is comically – and violently – interrupted before brute fate unhappily intervenes. The punchline to the piece, perfectly delivered by Franco, back in a noose after extraordinary events, is one of the funniest the Coens have written. The following episode, “Meal Ticket”, is dark, mean, unsettling. Swathed in furs like Warren Beatty in McCabe & Mrs Miller, Liam Neeson is a struggling geek show impresario on a harsh winter circuit of godforsaken mining towns. His only attraction is Harrison The Wingless Thrush, a quadruple amputee who entertains dwindling crowds by reciting Shelley and the Declaration Of Independence until he’s replaced by a performing chicken, another flightless bird, in another bitter Coens joke.

Everything about the film is hand-tooled, in many ways perfect. The star of the gig, however, may be Bruno Delbonnel’s cinematography. Landscapes familiar from hundreds of Western movies are rendered newly astonishing by his eye for scale and detail. Especially spectacular are the panoramic views he provides throughout “All Good Canyon” of an unsullied valley – an unsullied America – soon to be desecrated by the whiskery appearance of Tom Waits’ grizzled prospector. Channelling Walter Huston in  The Treasure Of The Sierra Madre, Waits spends nearly the whole episode in the solitary digging of holes, panning for gold in a stream and occasionally grunting. Violence soon finds him, though, and the body count goes up again.

The film’s most heartbreaking chapter is “The Gal Who Got Rattled”, the wagon train story. Zoe Kazan is achingly brilliant as the woman travelling west alone after the death of her devious tinhorn brother into an uncertain future, possibly an arranged marriage. Wagonmaster Billy Knapp, played by Bill Hick with heroic tenderness, duly falls in love with her. They even dare think of a future together, somewhere at the end of the trail, that’s cruelly compromised by the impetuous pursuit of a yapping dog and the arrival of a Commanche war party.

Finally, “The Mortal Remains” features three squabbling passengers on a stagecoach ride to the end of their lives, although they may each have other, preferred destinations. Their guides are two bounty hunters, Brendan Gleeson and a satanically dapper Jonjo O’Neill, whose mesmerising storytelling barely eases their increasingly nervous passage to the eternal darkness at  the far end of a film that on all fronts is blow-your-head-off brilliant.