Alex Harvey – The Last Of The Teenage Idols 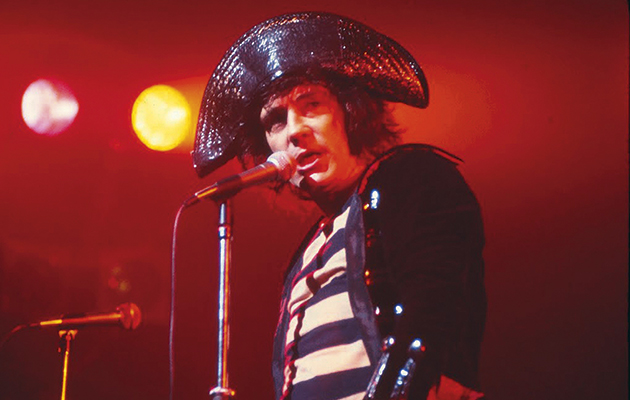 There are many Alex Harveys and there is only one. There is the acerbic performer whose career was killed by punk, but whose reputation now places him as one of the godfathers of the genre. There is the hippie who spent years in the pit band of the musical Hair, and discussed space and UFOs with David Bowie. There is the performer whose sense of dramatic menace inspired both Lulu and Nick Cave, prompting Lulu to record “Shout!” and Cave to essay “The Hammer Song”. And there is the young Alex Harvey, who shared a bill with The Beatles, won a competition to tour as “Scotland’s Tommy Steele”, and learned his chops in Hamburg. That’s without mentioning his time in a blues-influenced soul revue band, or his album for K-tel investigating the Loch Ness Monster.

Harvey’s singular career, as uneven as it was, can be seen as an alternative history of rock’n’roll. To the uninitiated, it boils down to the couple of hits he had with The Sensational Alex Harvey Band. In 1975, SAHB reached number 7 in the UK charts with their rambunctious cover of “Delilah”, a murder ballad which had been a hit for Tom Jones seven years earlier. In 1976, they scored their only other chart success with “Boston Tea Party”; a rather peculiar celebration of the American bicentennial which unspooled over Ted McKenna’s military drum-beat.

There is a lot more to Harvey’s talent than that, obviously. And over 14 discs, starting in Hamburg and ending – more or less – on the shores of Loch Ness, the fulcrum of his career shifts, and the bizarre theatricality of SAHB is thrown into a new light. They band were not, as it sometimes appears, a warped version of glam, even though Harvey was happy to throw his lungs at Alice Cooper’s “School’s Out” and The Osmonds’ “Crazy Horses” (a curious choice, though the song fits with Harvey’s oft-stated ecological maxim: “Don’t pish in the water supply”). They were, instead, an endlessly adaptable group of musicians, schooled in Harvey’s eclecticism, and able to shelter in whatever musical shadows Harvey was throwing. Certainly, they were loud, and it’s true that some of their prog stylings now sound dated, but SAHB were as adaptable as Harvey was unpredictable. That also made them a marketing nightmare, and their studio albums struggled to capture the power of their live performance, where Harvey’s imagination, fired by comic books and Cabaret, came to life in swaggering theatrical songs such as “Vambo” – a pulp celebration of Harvey’s Glasgow adolescence, with a Santa Claus/Captain Marvel superhero – and “The Tomahawk Kid” in which Harvey rebooted Robert Louis Stevenson.

The key is Hair. Examine the music Harvey made before and after, and it’s clear that his time in the pit band of the West End show was an apprenticeship. Before Hair, he is trying to interpret genres, albeit with considerable panache. The three tracks recorded in Hamburg with his brother Leslie in 1963 are extraordinary, the stand-out being a sparse attack on the traditional “Lord Randall”. Similarly, Harvey’s recordings with his Soul Band demonstrate the power of that voice, whether he’s taking a self-mocking run at “The Riddle Song” or clambering playfully over “Big Rock Candy Mountain”. By 1969, Harvey is getting playful. “Harp” (which appears in demo and complete form here) adds music to a poem by Czech writer Miroslav Holub, and has a faint whiff of The Velvet Underground.

And then comes Hair. It’s not the songs he recorded for the show itself, but what follows. In the aftermath, Harvey is bigger, bolder, an exaggerated version of his already exaggerated self. The voice is louder, and loaded with more Glaswegian menace. He is no longer just a band leader. He’s a one-man musical theatre.

Live, the effect is multiplied. On the five songs from a 1972 BBC In Concert, the band’s playing is heavier and harder, and Harvey’s command of the stage is absolute. But he’s still happy to subvert expectations, following the heightened drama of “Framed” (a Leiber and Stoller composition, first recorded by The Robins in 1954) with the woozy, barroom singalong “There’s No Lights On The Christmas Tree Mother, They’re Burning Big Louie Tonight”.

SAHB’s career was distorted somewhat by a quest for a hit single, with their management reassuring them that once they had a hit, they would be free to explore their creativity. Instead, the hit became a millstone. After “Delilah”, there was a demand for more of the same, and while the 1976 album The Penthouse Tapes showcases the band’s eclecticism, there is a sense that Harvey was beginning to regress into his earlier persona as the leader of a show band. SAHB’s final album Rock Drill (1977) is underrated, and if it doesn’t quite answer the challenge of punk, it does show that they were still capable of musical renewal. The rhythmic “Booids” is an interpretation of ancient Persian military music. Not exactly new wave, but startling in its way.

That wasn’t the end, but it was the curtain was falling. Harvey quit SAHB during rehearsals for a make-or-break tour, forming The New Band, whose album The Mafia Stole My Guitar emerged in 1979. It’s often overlooked, but the closing track “Just A Gigolo/I Ain’t Got Nobody” finds him exploring his inner Louis Armstrong to good effect.

Commercially, there was no going back. Harvey’s career was at a low ebb when he died in February 1982, the day before his 47th birthday. He was tired and disillusioned, and in an era when record sales mattered more than live performance, had never quite earned his due rewards. Still, he knew what he was doing. In a 24-minute spoken word piece (originally sent out to US radio stations with The Impossible Dream), Harvey muses on his upbringing and his band’s purpose. “We are not so much violent as an act of violence,” he says. “We go close to the edge. I am the director and we’re making a movie every night. And we’re playing the soundtrack at the same time.”

He talks about the need for intensity. Then he confesses that he’s really an actor rather than a singer, “although it’s still the truth”.

Q&A
Trudy Harvey (Alex’s widow) and Ted McKenna (SAHB drummer)
Is it true David Bowie used to visit Alex at your flat in Hampstead?
Trudy Harvey: David had had some success with music, but he was an unknown and he used to come and sit with us, and sleep on the floor and he came to see me when I was in hospital and had my son. At that time he was playing songs with mime artist Lindsay Kemp.

I heard Alex and Bowie used to loll around talking about UFOs.
TH: Yes, it’s true enough. They talked a lot about space. Alex recommended that David read Arthur C Clarke’s Childhood’s End. So yes it was absolutely that atmosphere of… flying saucers. It was in the middle of the hippie era.
Alex was an avid reader. He was always interested in politics. He would read science fiction. He read people like William Burroughs – the American writing of that era.

You were living by Hampstead Heath. Did you and Alex go for walks?
TH: Yes we did. Also, there used to be a newspaper called International Times. And there was something in it that said ‘Come to Hampstead Heath to join Yoko Ono, and learn how to catch’ … wait for it – ‘an imaginary butterfly’. That was the era. I can’t remember if we caught any butterflies. To my recall we didn’t. But someone was handing out sardines in tins. Feeding the 5000 or something. Yoko Ono wasn’t even known then. It sounds so crazy when I think about it now.

Alex had a hard-man image, but he was a pacifist. Was that a contradiction?
TH: Certainly he had to be a criminal or a hard nut to sing Framed. But he was a pacifist absolutely. However, he was fascinated by the British Empire, the military. He collected little lead soldiers and repaired them. It was a paradox. That’s not to say he didn’t get angry sometimes. He was human. He didn’t get into fights. I’ve never known him get into a fight. That’s a myth.
Ted McKenna: He had a very definite attitude about warfare and guns and aggression – mainly because he’d studied it. He was very au fait with all the battles. He maintained that he was actually at the battle of Waterloo. But he had this dual thing. He knew that live performance was not about being timid.

So he knew how to channel aggression?
TM: Of course. His experience told him what worked. He’d been in the Soul Band and he’d spent five years in Hair: sitting on the stage he watched how the American directors focused the audience’s attention. That and all these other experiences of being in Hamburg. Right at the start of SAHB he said: ‘They’re going to either love us or hate us,’ and he said, ‘We’re going to get them all.’ For him it was either Yes or No.
We supported Slade, who were the biggest live band in the country, but we went on as if we were the top band. They didn’t like us and they used to throw stuff at us. So Alex eventually got a water pistol – I won’t tell you what was in it – and he stood at the front of the stage, so when they spat or threw paper cups he would just squirt them. Wherever we went our attitude was: we’re the greatest band in the world. You won’t forget us.

Alex’s career followed the development of rock’n’roll.
TM: God yeah. All of that mix of emotions and influences came out through the band. It was full of contradictions. One minute we were trying to do Persian music or Jacques Brel’s “Next” or Edith Piaf’s “Heaven Have Mercy”. Then he’d want to do Hank Williams, or “Irene Goodnight” or “Gambling Barroom Blues”. One of the great luxuries of the band was that there wasn’t anything he could come up with that we wouldn’t fancy having a go at, whether it was a tango or a waltz, or “Cheek To Cheek”. And then going to see Cabaret and seeing that horrific moving scene where the young boys are singing “Tomorrow Belongs To Me”… chilling. We did it in Germany – Alex was fearless. He used to do “Framed” as a gangster, and then he did it as Hitler, and then he did it as Christ.

What was his particular talent?
TH: He was driven. He did want to tell people: look after yourself, look after your world, don’t piss in the water supply. Don’t buy any bullets, make any bullets or fire any bullets. I think he wanted to be a kind of messenger of something new. In a way, he was a kind of revolutionary.
TM: Alex’s fascination for man’s inhumanity to man was balanced by him saying he’d rather have a Fender Strat than an AK47, because you’d reach more people. He said if you play “Peggy Sue” by Buddy Holly, people are going to love that and they’re going to live. That was his philosophy.
INTERVIEWS: ALASTAIR McKAY