Hauntologists increasingly more than their influences 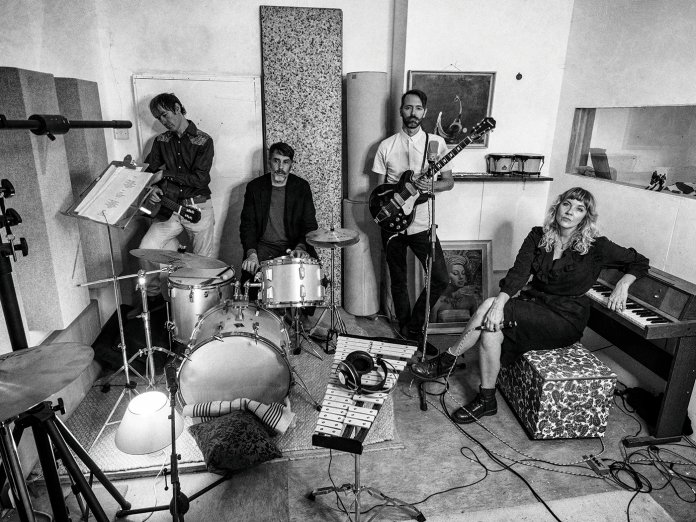 It’s unfortunate that The Soundcarriers are so identified with ‘hauntology’, the term coined by Simon Reynolds to describe what he referred to as “ghostified” music. While it’s unquestionably invited and warranted, this emphasis on the Nottingham band’s expertise at evoking a bygone era, as well as the technical manner in which they do so, focuses the spotlight on their historical influences. Prioritising style over their substance does the quartet few favours, however, because it makes it harder to think of them as a ‘living’ band. The reality is that while they may raise ghosts from the past – among them producers from the 1960s and early 1970s such as Joe Meek, David Axelrod and Serge Gainsbourg – The Soundcarriers are considerably more substantial than they are spectral.

On Wilds that’s more obvious than on their three previous collections, which have generally been more whimsical, flower-power affairs, indebted to breezy sources of folk, tropicália and psychedelia like Pentangle, Erasmos Carlos and The United States Of America. Leonore Wheatley’s maidenly vocals still indicate a fondness for chasing white rabbits like Grace Slick or skipping round maypoles in the style of The Wicker Man – though occasionally her detachment also brings to mind another classic film, 1975’s psychological horror The Stepford Wives – but the trio behind her have never sounded more muscular. Indeed, one wonders whether, had they hired, say, Alan Moulder as producer, they might even have ended up sounding like Ride on Nowhere, whose choirboy harmonies contrasted so effectively with their barrage of noise. Wilds, in other words, leaves the flowers to Wheatley and the power to Dorian Conway, Paul Isherwood and Adam Cann.

This is especially notable in the force with which Cann drums, whether thwacking his kit like it’s a recalcitrant child in a Barry Hines novel amid “Falling Back”’s relentless, Electric Prunes fuzz – compare his technique, incidentally, with Loz Colbert’s on “Seagull”, Nowhere’s opening track – or meting out more measured punishment on “Traces”, around whose abrasive effects and loping beat he hammers his cymbals or rolls his sticks on the snare for extra frills and spills. There’s a motorik quality to some rhythms, too, contributing to the songs’ propulsive immediacy and, simultaneously, their mesmerising character. The smell of sweat, one imagines, is as potent in their studio these days as the marijuana and incense thickening the air.

Such energy is similarly evident in Isherwood’s bass playing, the scratchy, percussive sound of his strings sometimes genuinely overwhelming the notes he’s plucking. Indeed, its physical nature is almost central to the frantic “At The Time”, certainly more vigorous than the synths pulsing through its verses. It’s as vital, too, to “Trace”’s forward motion as “Driver”’s, another high-throttle tune on which he scurries around his fretboard, hurtling towards a climax distantly echoing the finale of David Bowie’s “Suffragette City”. In addition, many of these tracks are pacier than any they’ve previously put to tape, exhibiting an oft-uncontained, formerly absent aggression which intimates a greater urge to animate their audience, previously only suggested by Celeste’s knowingly titled “The Last Broadcast”.

It’s knowingly titled, of course, because The Soundcarriers have frequently been compared to another hauntological act, Broadcast, and there’s little question they inhabit an analogous world. The galloping “Waves”’ chiming zither and reverbed flute provoke irresistible memories of Get Carter – a touchstone they also share with Stereolab, who covered the theme tune – and “Happens Too Soon” conjures up The Free Design, whose Chris Dedrick wrote the liner notes for The Soundcarriers’ debut, 2009’s Harmonium. Even their choice of guerrilla studios, including a Peak District cottage, a gallery and a former primary school, subliminally – if advertently – summons up memories of what the late Mark Fisher once referred to in a 2012 essay, “What Is Hauntology?” as “the lost futures that the 20th century taught us to anticipate”.

The Soundcarriers’ future, however, is far from lost. For all the geeky talk of plate reverbs and tube amps which inevitably surrounds them – and which, like Stereolab’s space-age imagery, tends to exclude more mainstream audiences by implying a demand for familiarity with its significance – what they are is timeless. That’s best illustrated by Wheatley’s evocative, infectious melodies, which could be compared to Amelia Fletcher’s or Sarah Cracknell’s. Wilds will continue to content those eager to brandish their knowledge of Ennio Morricone, Os Mutantes or Jacques Dutronc, but it nonetheless cries out for attention from those looking for more primal, immediate pleasures: beauty, bliss and release.