The Handsome Family – Odessa/Milk And Scissors 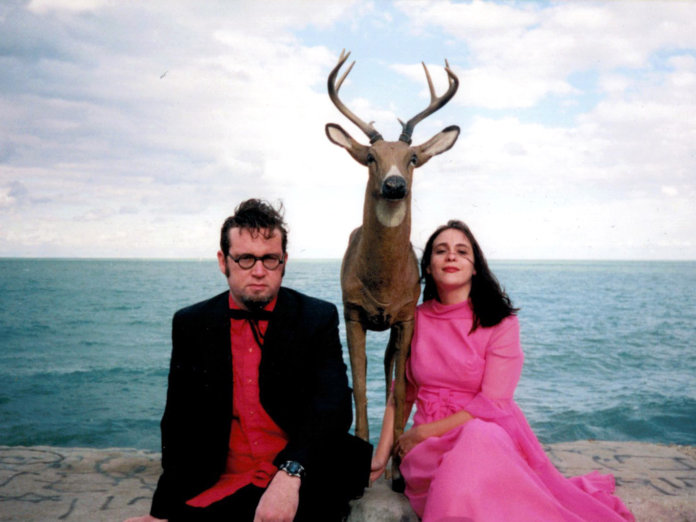 Brett and Rennie Sparks have been The Handsome Family since 1993. Few people outside Chicago, where they lived at the time, had heard them, however, before 1998’s Through The Trees. It was their third album, an early Americana landmark, and the template for the seven that followed. On all of them, Brett writes the music, often the kind of melodies surely first heard on a Carter Family porch on a far-off Appalachian afternoon. There are frequent twanging instances recalling Morricone western scores that conjure images of empty landscapes, dust blowing through deserted towns, tumbleweed a-rolling. His crooning baritone is often warmly reassuring, despite the horrors he’s usually singing about. Rennie writes the words, much influenced by traditional murder ballads, creepy folk tales, the world’s sheer oddness.

The familiar becomes disturbingly different in their songs. Nothing’s what it should be. That’s now the Manson Family sitting around a Thanksgiving table in a Norman Rockwell painting. The mutants from The Hills Have Eyes have moved into The Little House On The Prairie, scraps of blood-soaked gingham everywhere. Picture the characters and landscapes of Dylan’s John Wesley Harding reimagined by Edgar Allan Poe and David Lynch, in collaboration with Hank Williams. This is The Handsome Family’s world.

Odessa (1994) and Milk And Scissors (1996) return us to their Chicago beginnings. They were a trio then, with a drummer, Mike Werner. Anyone coming new to these reissues but otherwise familiar with The Handsome Family catalogue may be shocked by the racket they often make, especially on Odessa. On the guitar-driven “Here’s Hopin’”, they sound closer to Hüsker Dü than anything Harry Smith put on one of his anthologies of old, weird Americana. Violent guitar noises erupt throughout. “One Way Up”, for instance, is like an REM ballad until it’s interrupted by a Neil Young-esque solo.

Brett wrote the music and lyrics for 12 of the album’s 14 songs, which cover topics as cheerful as homicide, alienation and loss of faith. He fashioned a first-class country heartbreaker on “The Last”, a ghostly waltz with a guitar solo that sounds as if it’s dancing with itself under a pale winter moon. More commonly, his lyrics hint at the nightmarish song-stories Rennie was soon writing. “Big Bad Wolf” features a bikini-wearing wolf who digs kung fu movies. “Happy Harvest” is about pet murder and family derangement, much at odds with the music’s oompah jollity. Rennie’s contributions are a murder ballad and a song about bestiality.

Milk And Scissors has its share of outstanding guitar crackle, too. There’s a solo on “Winnebago Skeletons”, for a start, that sounds as if it’s about to go full “Powderfinger”. The version of the traditional “The House Carpenter” is set to a relentless Velvet Underground chug. “The King Who Wouldn’t Smile” has a cowpunk bounce, with jaunty slide guitar from Brett’s brother, Darrell. But they were already moving towards the more traditional sound of Through The Trees and everything after. Brett sings more softly, more often. There are acoustic guitars, pedal steel. Brett’s “# 1 Country Song” is done entirely straight. You can imagine George Jones covering it on one of his mid-’70s albums – Nothing Ever Hurt Me (Half As Bad As Leaving You), perhaps – with Charlie McCoy on harmonica, Billy Sherrill strings, the whole Nashville thing.

“Lake Geneva”, their audacious reworking of Leonard Cohen’s “Suzanne”, refers to Brett’s ongoing mental health problems, for which he was hospitalised and diagnosed as bipolar. Rennie, also prone to depression, was writing all the words by now, and the songs abound with anthropomorphic absurdities – a poodle that thinks it’s a cowboy, a fish with dentures – but she’s already a specialist in trauma. “Emily Shore 1819-1839” describes the death of the eponymous 19th-century diarist (“She’d been coughing up blood since the dogwoods bloomed”). “Drunk By Noon” is full of murky fatalism, a dark anticipation of suffering to come. “Amelia Earhart Vs The Dancing Bear” imagines the intrepid aviator’s last moments “after her plane was torn apart and bursting through the trees”. “Tin Foil” is a song of sheer hopelessness, set to a toe-tapping two-step shuffle, the night’s last dance.

Much great music followed. But these records remain individually vital, the first stirrings of an extraordinary musical partnership.