The Beau Brummels – Turn Around: The Complete Recordings 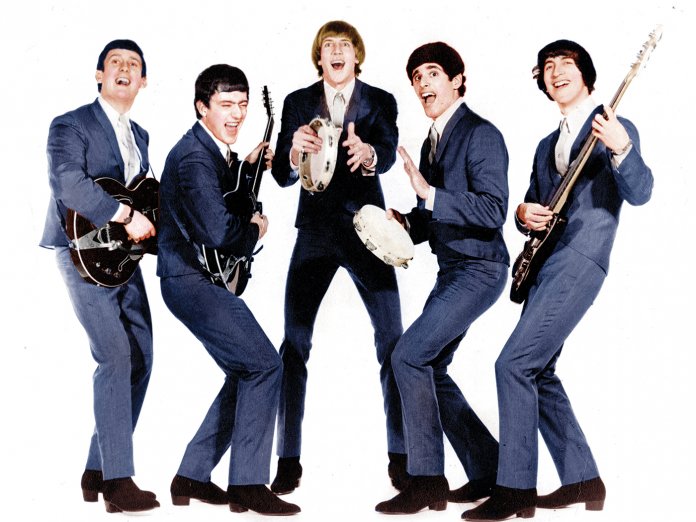 A sign of how quickly the folk, country and “baroque and roll” of The Beau Brummels entered mainstream consciousness came with their appearance in a 1965 episode of The Flintstones. Billed, almost inevitably, as The Beau Brummelstones and sporting plum-coloured, turtleneck prehistoric garb, the San Francisco five-piece had been together less than 18 months when their animated versions took to the stage of the Bedrock A-Go-Go nightclub to perform Laugh, Laugh.

That debut hit (co-produced by a 21-year-old Sylvester Stewart, before he rebranded himself as Sly Stone) was at the vanguard of the Bay Area’s reaction to the British Invasion, and swathes of the Anglophiles’ early recordings were informed especially by the acoustic strum of Beatles For Sale. However, the harmonies of lead singer Sal Valentino and guitarists Ron Elliott and Declan Mulligan were, initially, rooted in the pop-folk of closer-to-home outfits like The Kingston Trio.

Introducing The Beau Brummels sets out their stall, hook-packed Elliott originals (the bubblegum-tastic Stick Like Glue) supplemented by feather-light covers of country star Don Gibson’s Oh Lonesome Me and bluesman Jimmy Reed’s Ain’t That Loving You Baby. Volume 2 is even more harmony-laden and arguably the band’s strongest set of songs, with Byrds motifs aplenty on the jangle overload Don’t Talk To Strangers.

The band themselves were unhappy with Beau Brummels ’66, a quickie covers project at the behest of their new label, Warner Brothers, rush-released to capitalise on previous success, but underwhelming when held up against the disc contained here of demos recorded for their former paymasters, Autumn. There’s little joy in the workmanlike and wearisomely obvious retreads of Monday Monday or Mr Tambourine Man and a brace of Beatles tunes, but the chamber-pop overhaul of the Stones’ Play With Fire is eerily affecting, and McCartney’s lesser known Woman (a medium-sized hit for Peter & Gordon earlier in the year) is a bouncy 12-bar shuffle.

A slimmed-down lineup of Valentino, Elliott and bassist Ron Meagher foresook the live stage to focus on 1967’s Triangle, its multi-layered, studio-bound psychedelia realised with the help of primo sessioneers including Van Dyke Parks, James Burton and Carol Kaye. A concept album of sorts, its fantasy subject matter is heavily influenced by JRR Tolkien (The Wolf Of Velvet Fortune, first single Magic Hollow), but covers of Merle Travis’s Nine Pound Hammer and Randy Newman’s Old Kentucky Home signalled a soon-come full-on pivot towards country, as do demos of the previously unreleased elegant strummers Happiness Is Funny and Elevators.

Recorded at, and taking its title from, the famed Tennessee studio of Patsy Cline and Loretta Lynn producer Owen Bradley, Bradley’s Barn (’68) sees Warners attempt to pitch the Brummels to the same burgeoning country-rock audience as labelmates The Everly Brothers(who would cover Turn Around for their own Roots album the same year). Honky-tonk hues are to the fore, not least on stripped-back outtakes of Johnny Cash’s Long Black Veil and Dylan’s I’ll Be Your Baby Tonight, but it’s at its most robust on Love Can Fall A Long Way Down, reconnecting with the shimmering harmony
pop that first brought the band to the attention of record buyers.