A landmark revisited, and a Suicide survivor’s solo outings reissued and expanded 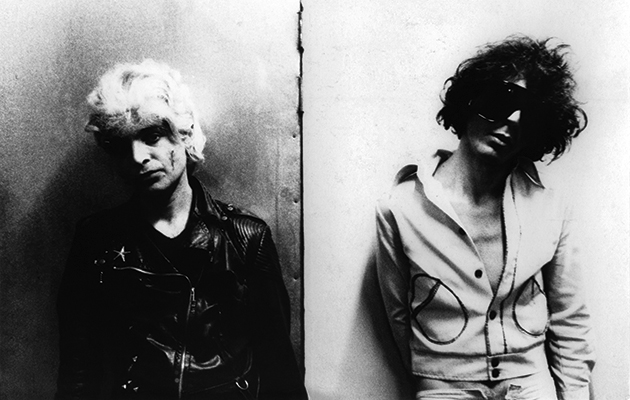 Simplicity was always at the core of New York’s proto-punk electronics-and-voice duo Suicide. For all of the legend accrued by their 1977 debut album – and this is an album with a sturdy, heroic, undeniable reputation – it’s still a shock, sometimes, to hit play and be confronted with the radical minimalism of songs like “Ghost Rider” and “Girl”. It’s about the unpretentious reductionism of all great rock’n’roll, but also of making do with the tools in front of you.

If that’s testament to the creativity of Martin Rev (keyboards) and the late, great Alan Vega (voice), it also speaks  of the cultural and spiritual tumult within which Suicide was created, of a  ’70s New York in fiscal crisis, on a downward spiral.

Suicide formed in 1971, and from the get-go, the duo was inseparable – in Suicide’s early years, Rev and Vega saw each other daily. Out of the New York boho milieu, they were tight with New York Dolls, and there are tales of the Dolls’ David Johansen tripping out while rehearsing with the duo. But Suicide were also a confrontational force, Vega’s gutter-Elvis persona deliberately provocative, causing riots at their bigger support shows, and Rev, impassive behind his keyboards. At one gig, Vega jumped the members of Kraftwerk, looking for all the world like squares in suits: “They were perfect targets,” Rev chuckled.

Suicide itself – remastered and reissued by Mute on red vinyl (with an exclusive art print), CD (in a hardback book case) and download – is a near-perfect set of seven songs, balanced between psychoacoustic trauma, classic rock’n’roll signifiers, and just occasionally, moments of pure heartbreak. “Cheree” picks up the latter thread, a glorious hymnal to Vega’s ‘black leather lady’, Rev’s electronics sparkling in the background, the song’s gorgeous melody twinkling in the ear. For the song’s three minutes, it feels like the world is captured in stasis – the only thing that matters is “Cheree”’s eternal now, the revelation of pure poetry at the core of Rev and Vega’s dreamed muse. Elsewhere, the duo channel the bone-crushingly simple riffs and rhythms of early rock’n’roll and rockabilly on “Ghost Rider” and “Johnny”, and hammer the same two-note motif into the ground on the pounding, pulsing “Rocket USA”, with Vega’s immortal two-line chant, “Gonna crash/gonna die”.

But it’s hard to argue that “Frankie Teardrop” is anything but the centrepiece of Suicide, its 10 minutes of incessant drone and throb the perfect grounding for Vega’s still-terrifying narrative of disaffection, infanticide, suicide, a veritable list of anomic cultural nightmares, before collapsing into grunts and screams, the song’s perfect denouement the realisation, “We’re all Frankies/We’re all in hell”. Rev’s electronics become an elemental, primal force here – great waves of distressed noise capturing Frankie’s mindset perfectly. “Frankie Teardrop” is a tour de force, then, and it was hard to think how Suicide would move beyond it.

They released another great album in 1980, but Rev and Vega parted ways for a time – their next, “comeback” album, A Way Of Life, appeared in 1988. But the ’80s saw both members of Suicide release solo material; Rev’s self-titled first album, released in 1980, is another minimalist gem, then in 1985 he reappeared with Clouds Of Glory, now reissued on vinyl. Without Vega as his foil, Rev focused more intently on carving large chunks of electronic sound out of his equipment, and the material feels even more focused on the possibilities of the synth than those Suicide albums. But there’s a through-line there, most obviously in the annexing of primitive, stomping pulse rhythms and sick, warping tones to ultra-simple riffs and vamps, spiralling around each other with menace – see the clatter of the opening “Rocking Horse”, or the amorphous crackle and hum of “Metatron” – or with love, as in the gentle, lambent glow of “Whisper”.

A song like “Whisper”, in fact, points to Rev’s real, lasting genius, which is the dewy-eyed nostalgia and hope at the core of his most beautiful music. He’s often lumped in with electronic artists, but in many ways he’s closer to a strain of mutant rock’n’roll visionaries, from Alex Chilton through Epic Soundtracks to Spacemen 3’s Sonic Boom, who seem to understand that the core of great rock’n’roll is the unadorned love song, expressed as simply and purely as possible. And though Rev’s music is instrumental, you can also hear his grasp on this on the reissued, expanded 12-track version of Cheyenne, the 1991 album that partly revisited material from the second Suicide album. In among the darkness and paranoia of pieces like “Little Rock” or “Red Sierra” are some of Rev’s most affectingly gorgeous moments, tear-dappled teenage symphonies to God like “River Of Tears”, “Pony”, or the choral “Coyote”. They’re beautiful offerings to the listener, uncanny but pure and true.