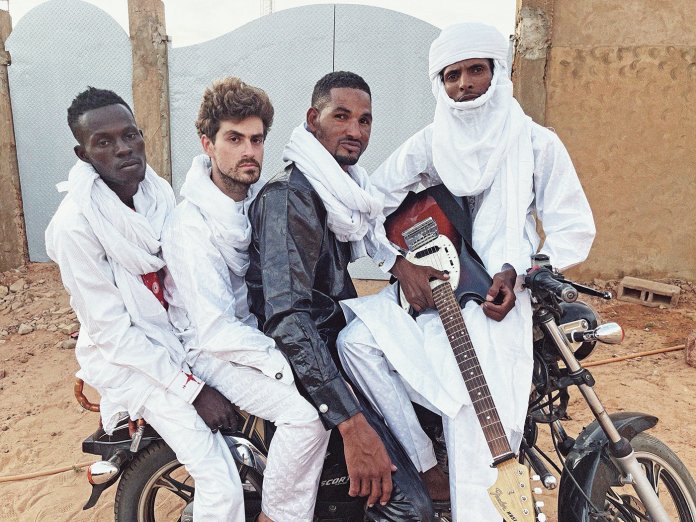 What’s known as “desert blues” by western music consumers clearly has a history aeons older than Tinariwen – but it’s fair to say that the sound was popularised by their second album, 2004’s Amassakoul, a hybrid of assouf and electric rock. If the Malian band have become the style’s leading ambassadors, they’re by no means its sole representatives: Songhoy Blues, Imarhan, Tamikrest and Kel Assouf each have their own identity and are some of the names now well established outside Africa. Mdou Moctar, maybe less so.

The songwriter and guitarist, born Mahamadou Souleymane, is from Agadez, a desert city in central Niger, and has four studio albums proper and one movie soundtrack (all on US label Sahel Sounds) under his belt, plus a live record for Third Man. He also has an interesting backstory, which has perhaps been advanced at the expense of his music: Moctar built his first guitar and taught himself to play; his early recordings became popular on Africa’s mobile MP3-sharing networks; he also wrote and starred in the first Tuareg-language film, a homage to Purple Rain that told his own life story. However, that emphasis should shift with Afrique Victime.

An exhilarating band set that mixes electric and acoustic instrumentation, it’s at once fiercely modern and as ancient as the Niger river. As with previous albums, its roots are in the country’s takamba style, which is played on the tahardent (three-stringed lute) and calabash, and is popular at weddings. But on Afrique Victime, ’70s psych and ’80s rock are defining elements, with wild solos a foil for hypnotic contemplation. It leans on the seemingly intuitive interplay between Moctar’s lead shredding – of a gutsy yet fluid kind that recalls Van Halen, Prince and fellow lefty Hendrix – and the vital pulses of his long-serving rhythm guitarist, Ahmoudou Madassane. Mikey Coltun – a musician from New York who’s played bass with Moctar for about three years and has also served in Steve Gunn’s band – produces. Songs were recorded while the group were on tour in 2019 promoting Ilana: The Creator, in various hotel rooms, apartments, backstage at venues, in Coltun’s mobile unit (Studio Moustique) and in the field in Niger, although the main tracking was done in studios in the US and Netherlands.

The album opens with “Chismiten”, a rooster’s crow and the crunch of footsteps signalling a new day before Moctar’s guitar rings out, clean, steel-tipped and sonorous. On a whooped cue, rolling drums and polyrhythmic string currents rush in and steadily accelerate, until the whole is an exultant tumble of glorious, interlocking harmonies. “Taliat” suggests a vast orchestra of guitars but its yearning choral work and see-sawing sweetness provide a breather, as does the hypnotic, handclap-punctuated “Ya Habibti”. It pays respect to Abdallah Oumbadougou, the late Nigerien guitarist who helped pioneer the Tuareg modernist style. The lyrical ebb and flow of the acoustic “Tala Tannam”, delicately cut across by Moctar’s mercurial guitar lines, is a potent reminder that West Africa is the blues’ deep crucible, while it’s impossible to listen to the mesmeric “Layla” and not think of John Lee Hooker as much as Ali Farka Touré.

The album’s showstopper, though, is the title track, seven-and-a-half intoxicating minutes of relentlessly surging rhythms, haunting vocals and muscular shredding that tips its hat to both Page and The Mars Volta’s Omar Rodríguez-López. It packs a powerful lyrical punch too, addressing the urgent need for Africans to stand up and speak out, and questioning why the Tunisian Jasmine Revolution failed to bloom across the continent. The title also speaks to Africa’s status as historically judged by the west.

“Africa is a victim of so many crimes”, sings Moctar, whose homeland may be a burgeoning democracy but is also an increasingly troubled part of the Sahel. “If we stay silent it will be the end of us/ Why is this happening?/What is the reason behind this?”

The closer is “Bismilahi Atagah”, which strikes a calmer, more dulcet note and makes it especially easy to understand why Matt Sweeney and Bonnie “Prince” Billy asked Moctar to guest on their new Superwolves album. The acoustic fingerpicking, lullaby rhythm and his gentle, multi-tracked vocal are deceptive though – he’s calling on his god to save him from love’s torment. Those introductory footsteps reappear at the end, crunching their way into the distance. But this is the sound of advancement, not retreat. Afrique Victime may be Mdou Moctar’s sixth studio album but, in many ways, he’s just begun.