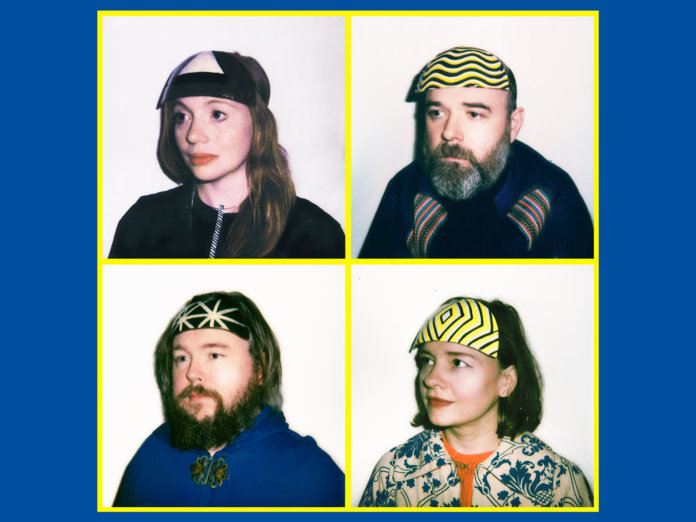 If Richard Dawson’s 2020 attempted to capture Britain today, the new album by the experimental unit Hen Ogledd, of which he is a quarter, has a far broader temporal scope. We hear of a “pre-Cambrian dream”, of a medieval illuminated manuscript held on an Ethiopian island monastery, and of a galactic pleasure cruise far into the future. The quartet even start us at the end with “Farewell”, which seems to hint at humanity’s reluctant retreat from an apocalyptic Earth, but could just as easily refer to their sorrow over Brexit.

Hen Ogledd’s history is almost as strange as their subject matter: they began as a duo of Dawson on guitar and Rhodri Davies on electric harp, playing scratchy, difficult improv not unlike their serrated instrumental work on the singer-songwriter’s The Glass Trunk. They began to incorporate electronics and vocals when Dawn Bothwell joined in 2016, then became a different beast when Sally Pilkington made them a quartet not long after. Resolutely democratic, they vowed they’d all sing, and Dawson switched to bass, better to anchor the synths and beats from Pilkington and Bothwell. 2018’s Mogic presented their new sound, Technicolor pop with an experimental bent, but Free Humans tops it in terms of sheer adventurousness.

Totalling almost 80 minutes, it’s a blur of different moods; yet like, say, ‘the White Album’, even the weaker tracks are enhanced by the sheer scale of the thing. Recording in just three days meant there was no danger of overthinking the material, and so there’s a vivid vitality to these 14 tracks, even when they’re a little distended with synth overdubs or layered electronic burbles.

It’s possible to sift Free Humans’ songs into three piles: the ‘pop’ songs, the experiments and those somewhere in between. In the more accessible corner, there’s “Trouble”, with Bothwell’s charmingly untutored voice and a stunning electric harp solo from Davies – the title is also the name of Dawson and Pilkington’s cat, which adds another layer to lines like, “Trouble is the name of my shadow.” Elsewhere, “Crimson Star” is glorious sci-fi nostalgia, a little “Running Up That Hill” in its synthetic gallop, with Dawson taking on the role of a former cabaret singer aboard an interplanetary cruise ship; and the closing “Skinny Dippers” is vaguely Middle Eastern-tinged electro-pop with Pilkington singing of the joys of wild swimming.

At the same time, the group are not afraid to embrace the absurd or difficult: “Time Party” is warped disco that incorporates Art Of Noise-esque collage, free-jazz sax and what sounds like melting steel drums, while “The Loch Ness Monster’s Song” finds Bothwell belting out Edwin Morgan’s nonsense poem over pulsing electronics that evoke Autechre after a half-term at circus school. “Kebran Gospel Gossip” imagines Tangerine Dream jamming with Pharoah Sanders, and “Earworm” is obnoxious techno that finds Davies singing in falsetto and then breaking into some choice swearing: “Mumblecrust… mucksprout, fopdoodle… fucksakes!”

All very fun – and yet Free Humans also deals with some complex concepts and deep emotions. “Bwganod” channels the Gaia theory, albeit within a fractured rap from Bothwell: “Smoking choking life out of this rotten planet… Reclaim the female world before it’s too late.” On “Feral”, almost nine minutes of swooning trip-hop, Pilkington quotes Marx and commands the listener “don’t look back”, even as she sings of “fossils underground”. On “Space Golf”, she imagines Trump fleeing the planet he’s helped to destroy: “Looking back on the world below/Safe from the damage and the woe/But you cannot play golf in space.”

Most affecting of all are “Farewell” and “Flickering Lights”, both sung by Dawson and anchored by dewy organ. “Farewell to the unmasked face,” he chants at one point in a stunning bit of precognition, while on “Flickering Lights” he seems to sing from the point of view of a bereaved spouse: “It’s been quite a struggle coping/I suppose I am still hoping/That the rustling leaves I hear/Is you whispering in my ear…” It’s deeply sad, and disarmingly gorgeous.

If the hyperactive following track, “Bwganod”, resolutely shatters that mood with its mentions of “leopard-print fishnet underpants” and “radioactive nuclear bullshit”, then that’s OK; the magic of Free Humans is in that disconnect. Flitting from the sublime to the ridiculous, from the personal to the universal, and from a time before people to a time long after them, it’s a mess, but a glorious one all the same.