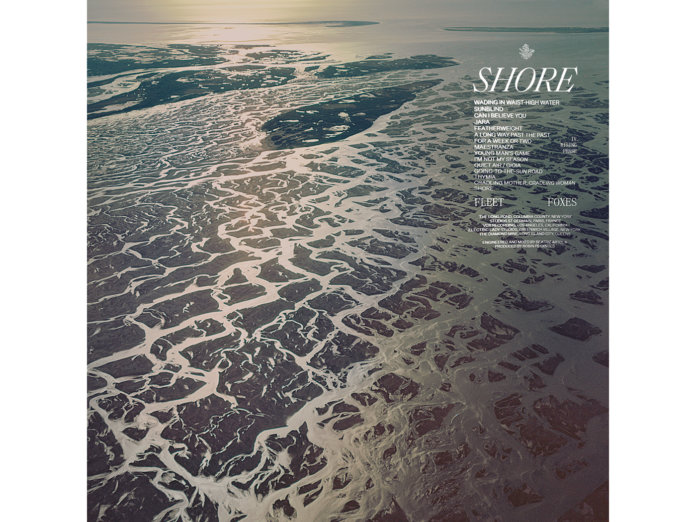 Early into lockdown, people began sharing clips on social media of deer roaming housing estates in Essex, coyotes prowling across the Golden Gate Bridge, goats promenading along Llandudno high street and other signs that animals were moving into the spaces that humans had vacated. Nature, it seemed, was making a comeback in the wake of the pandemic.

It feels, then, like an appropriate time to welcome back Fleet Foxes. Shore, their fourth album, is accompanied by a film shot around Washington State comprising a series of nature scenes – water running over stone, flowers in the field, horses in a meadow, distant mountains, trees glimpsed across a misty lake, a crescent moon. Much like these sun-dappled images of the American wilderness, Shore is an emissary from a better, more beguiling world than the one we left before lockdown began in April.

It transpires lockdown has been useful, creatively-speaking, for Robin Pecknold. He started work on this album not long after the band wrapped their world tour to support 2017’s Crack-Up. Preliminary writing took place at his home in New York, then in Portugal, before he took early demos of the album to Aaron Dessner’s Long Pond studio in upstate New York. The music took shape there, improved by further sessions in Paris and Los Angeles. But Pecknold now admits to being “a bit lost” with the album. He had music; but the lyrics evaded him. Lengthy, lockdown drives through upstate New York, though, gave him inspiration – the wild, empty landscape providing creative nourishment.

Released on the autumnal equinox, Shore finds Pecknold taking a left turn. On a superficial level, the album doesn’t feature any other regular members of Fleet Foxes, who were absent due to lockdown restrictions. Pecknold is at great pains to make clear that he hasn’t abandoned them: “The studio albums have always been predominantly my work and my vision,” he writes in an artist’s statement. “I’ve always handled all the songwriting, most of the vocals and harmonies, and most of the recording of the instrumentation, usually working most closely with one other person, a producer or bandmate, to see the album through to completion.” He anticipates reconnecting with his bandmates for “nine more songs”, written collaboratively, “to augment the fifteen here.”

For Shore, Pecknold’s chief collaborator is engineer Beatriz Artola, while the other musicians include Christopher Bear, Kevin Morby, Daniel Rossen and Joshua Jaeger. The first voice you hear isn’t even Pecknold’s: it’s Uwade Akhere, who Pecknold met while they were both students at Columbia University, providing an early signal that you might expect something different here. Nothing radical, perhaps, but all the same Shore feels like a comfortable progression from Crack-Up.

Crack-Up found Pecknold and his cohorts pushing the band’s trademark luscious harmonies and wonderful orchestrations to the limit. With Shore, Pecknold appears to be striving to embrace simplicity. The lyrical heaviness has gone – although he can’t resist subtitling Shore as “IV. Rising Phase” (which I guess is better than, say, “The Search For Spock”). Meanwhile, eight of the album’s 15 tracks are under four minutes long; the digressive song-suites of Crack-Up have been replaced by bright chord progressions.

Shore begins, though, roughly where Crack-Up left off. The cover image of a shoreline loosely refers back to Hiroshi Hamaya’s painting Eroded Sea Cliff At Tōjinbō, which appeared on Crack-Up’s sleeve. There is a lot of water on this album – songs take place near it, characters interact with it, its powerful cleansing and destructive qualities are both cited. There are oceans, rain and even a reference to the Silver Jews album, American Water. The album opens with “Wading In Waist-High Water”, with Akhere accompanied only by warm acoustic guitar, before a shift in tempo introduces horns, a choir, piano and drums. It’s an epic progression, but the transitions are far smoother and more natural than some of the jumps on Crack-Up.

The horns segue into “Sunblind”, whose rapturous chorus is one of the most joyous and uplifting moments on Shore. A celebration of Pecknold’s fallen musical heroes – most prominently, Richard Swift and David Berman – the song seeks out positivity even in these immense losses. “I’m loud and alive, singing you all night,” Pecknold rhapsodies over beautiful rolling piano and ravishing acoustic guitar. “Can I Believe You” and “Jara” are focussed and determined, carried along on soaring melodies and breathless percussion.

Pecknold slows the pace for “Featherweight” – which he debuted last month as part of Vote Ready, a livestream event that encouraged viewers to register to vote. Ostensibly, a sweet folk song, it is full of tiny details – filigrees of guitar and brisk piano motifs lying under the main melody – that remind us, even in the most superficially straightforward material, Pecknold can still find room for nuanced dynamics. Similarly, the Laurel Canyon loveliness of “A Long Way Past The Past” features plenty of detail to burrow into, although never at the expense of the song itself. “For A Week Or Two” is ostensibly Pecknold and a piano, but even something as simple and effective as this is augmented by birdsong at the end.

The birdsong segues into “Maestranza” – named, possibly, after a bullring in Seville – driven by Pecknold’s swaggering acoustic guitar, before bursting into “Young Man’s Game”. It’s tempting to view this song as Pecknold (now at the ripe old age of 34) looking back at his younger self: “I could dress as Arthur Lee / Scrape my shoes the right way / Maybe read Ulysses / But it’s a young man’s game”. Its playful melodies, skittering drums and tumbling harmonies give it a playful quality: “I’ve been a rolling antique / For all my life” he sings at one point. It contrasts with the autumnal mood of “I’m Not My Season”, which in turn gives way to “Quiet Air/Gioia”. Another of Pecknold’s song-cycles, its shifts are gentle, organic, soothed by Pecknold’s multi-tracked vocals.

“Going-To-The-Sun Road” sweeps along on harpsichord, horns and acoustic guitars while “Thymia” builds around a simple horn and piano arrangement. Then it’s back shifting tempos and layered instruments on “Cradling Mother, Cradling Woman” (guitars, violin, drums, horns). The song opens with a sample of Brian Wilson working on vocal overdubs for “Don’t Talk (Put Your Head on My Shoulder)” from the Pet Sounds box set; as good an indication as any where Pecknold’s head is at.

The ebb and flow, from quite straightforward songs to more complex and textured compositions, gives Shore its internal rhythm – tide-like, you might say – that reaches its conclusion with the title song. A lament to the fallen – John Prine, David Berman and the fire that devastated the Julia Pfeiffer Burns State Parks – it’s minor chords, layered orchestral passages and subtle processing recall In Rainbows era Radiohead.

All in all, it’s a beautiful record – and one that bears repeated plays. I’ve been playing it for around 10 days now, mostly on headphones, and it’s still revealing new details with each listen. Pecknold has created another beautiful, immersive world for us to dive into – and with the prospect of more new music, this time with the rest of his regular Fleet Foxes bandmates, to follow in 2021, it feels like Pecknold has a lot left to say. Four albums in, he’s showing no signs of letting his quality control slide.