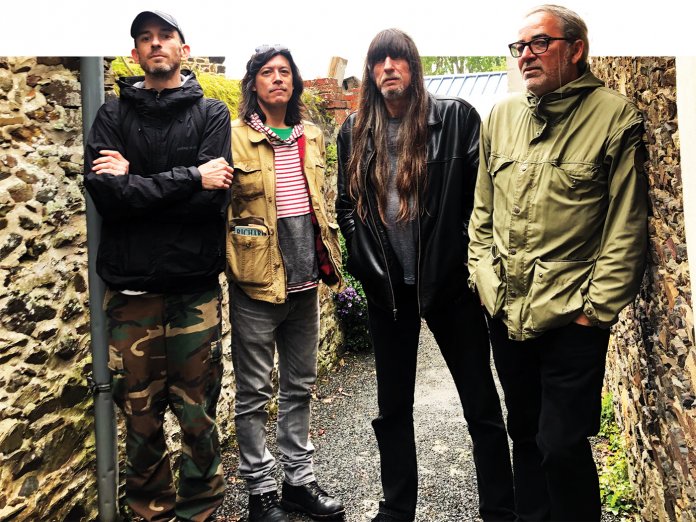 When Paul “Top Dollar” Major promises to “go full condor” in Admonitions’ opener The Offender, he doesn’t need to explain what he means. Besides recasting Endless Boogie’s sexagenarian frontman as an ’80s action-movie hero about to open a can of whup-ass, the line serves as a handy description for the many moments when he and his bandmates launch out of their signature motorik-choogle groove, spread their ragged wings and soar toward the sun. A gesture that seems majestic, foolhardy and potentially a little ridiculous, it’s fundamental to the mission this ragtag crew set for themselves every time they’ve jammed on stage or in a studio in their almost 25 years together.

It’s hardly surprising to learn they toyed with the idea of calling the new album Full Condor before opting for something that doesn’t evoke images of a shirtless Chuck Norris quite so strongly. Endless Boogie nevertheless achieve full flight on Admonitions with the same regularity as they have on each of their four preceding studio albums, starting with 2008’s Focus Level. They’ve done the same throughout the generous trove of limited-run releases like 2020’s The Gathered And Scattered, a 4LP set of rehearsal recordings dating back to the first years after the band was formed in Brooklyn by friends with various connections to Matador Records and to the vinyl-collector circles in which Major has long been a revered figure.

Yet Admonitions also sees them head toward untravelled patches of sky. While The Offender and Jim Tully are primo 20-minute-plus showcases of Endless Boogie’s original AC/DC-meets-Neu! formulation, other songs – like Bad Call, a punchy piece of pub-rock raunch – prove they can be more economical, too. Elsewhere, Kurt Vile adds special sauce to the mesmerising Counterfeiter; and the more ominous vibe of Admonitions’ final side is equally suggestive of Endless Boogie’s eagerness to not just go full condor but full everything else, too.

This welcome expansion of the band’s greasy ethos may be inevitable given the pandemic’s impact on their usual just-crank-it-out ways of working. The seven songs on Admonitions are principally drawn from two spates of sessions in New York and Sweden shortly before their tour plans for Australia and Europe went out the window in the spring of 2020. The lockdown limbo gave guitarist and de facto leader Jesper Eklow more time to tinker with what they had in the can. Whatever adjustments he made didn’t obscure the raw energy of the longest of the new tracks. While The Offender delivers the requisite supply of grinding riffage and Major’s trademark squalls and growls, it’s Jim Tully – named after a tough-guy writer who was a hero to Hemingway – where they make their full ascension as the mid-song gear shift prompts fiery exchanges between Major and guest guitarist Matt Sweeney. Both tracks should also assuage the fears of any fans who fretted about the more sluggish nature of 2017’s Vibe Killer.

The resurgence of the old fires are even clearer on Admonitions’ shorter tracks, which, since we’re talking about Endless Boogie, may still near the 10-minute mark. Disposable Thumbs sees them happily double down on a groove that’s two parts Bo Diddley to one part Klaus Dinger. Bad Call is even more fun: a tight, Flamin’ Groovies-worthy rocker with lyrics railing against the sin of serving meat on skewers (“Mama don’t like that city chicken/’Cause it comes on a stick!”). Consisting of a jam excerpt reworked by Kurt Vile, Counterfeiter strikes a pleasing balance between the band’s usual drive and attack with their Philly pal’s more languid sensibility.

The biggest surprise arrives in the finale, at which point the wilder energy of the preceding three sides dissipates into a cloud of murk and menace. In The Conversation, unsettling snatches of dialogue (“Antisocial behaviour? What’s that?”) are set against a hollowed-out dirge by Eklow and drummer Harry Druzd. Despite the cheeky title of Eklow’s solo piece that concludes Admonitions, The Incompetent Villains Of 1968 is even creepier, marked as it is by a sense of desolation that evokes the ultra-minimalist metal of Earth’s Sub Pop recordings. To hear Endless Boogie’s psych-blues-boogie stripped and shorn of its ferocity is oddly poignant in what it suggests about the impact of isolation on a band who have always taken such evident delight in each other’s company.

Even so, Admonitions remains a fiery testament to Endless Boogie’s creative rejuvenation. And while this instalment of the saga may end with that imaginary action hero looking like a far cry from his usual condor self, don’t be fooled – he’s just saving it for the sequel.