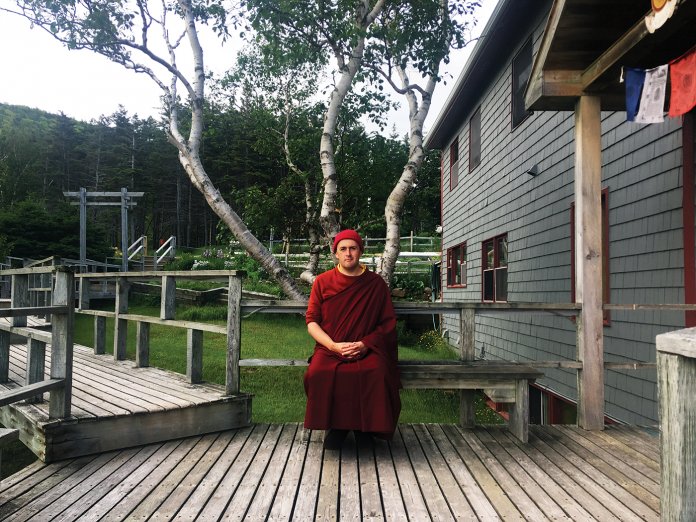 Take a map and find Gampo Abbey, a Buddhist monastery situated on a rugged finger of Nova Scotia, Canada, and you might notice that it sits at the end of a long track called Red River Road. David Morris, singer and songwriter in England’s Red River Dialect, wasn’t aware of the name when he applied for a nine-month stay at the monastery, but he couldn’t help draw meaning from it.

“Part of me likes the idea that everything’s coming together in some kind of cosmic fashion,” he tells Uncut, “like a David Lynch-like mystical thing going on, so I was quite happy to see that. If it’s at the end of Red River Road, though, does that mean it’s the end of my musical career?”

One would hope Monastic Love Songs instead marks the beginning of a fruitful solo journey – Morris himself is keen for it to flow alongside that of his band, who are still, in theory, a going concern. Following the recording of the group’s last album, 2019’s Abundance Welcoming Ghosts, the songwriter headed out to Gampo Abbey, one of the only establishments that allows its members to make temporary rather than lifetime vows. Musical instruments were not allowed (Morris believes a previous monk with a fondness for the ukulele put a stop to that), but in the final three months of his nine-month stay he was granted limited time with a nylon-string guitar and composed a series of songs.

When he left Gampo, he went straight to the Hotel2Tango studio in Montreal to track the record in one day with Swans’ Thor Harris on drums and percussion and Godspeed’s Thierry Amar on double bass. The result is sparse and subtle, the album’s 10 songs drifting at an unhurried and becalmed pace. Given due attention, these 36 minutes are seductive and deeply involving, hard-hitting in the manner of Nick Drake’s Pink Moon or Richard & Linda Thompson’s similarly spiritual Pour Down Like Silver.

The mood is established by the opening New Safe, at five-and-a-half minutes the longest track here. It’s a floating thing, hypnotic in its shifting chords and churning drones, while Morris sings of letting his “belly tension go” and of being at one with the world: “I feel the great expansive sky/Remember there’s no need to strive”. There’s a darker undercurrent here too, suggested by a discordant middle section and lines about a cracked safe leaking “a lake… thick like oil, scary stuff”.

The breezy Inner Smile began as a poem of thanks to his tai chi teacher, and it provides a positive, exultant end to the record, even as its lyrics dabble in aphorisms like the repeated, “it also tickles the paws of the jackals”. Skeleton Key evokes early Incredible String Band in its eastern-tinged verses, while its words catalogue Morris’s hopes as he entered the monastery: “Shaving my face and shaving my head/That person is dead… Please teach me how to always stay kind and open”.

“Rhododendron”, depicting Morris finding comfort in the shadow of a flower over a shrine, is another deeply spiritual song, yet it’s far from the hectoring associated with some religious music. Indeed, the enforced celibacy and hours of meditation at times led Morris to examine his own past relationships and the nature of love itself. Purple Gold,
for instance, looks back on first love, drawing a detailed picture of a 14-year-old Morris and friend listening to REM’s Up, “one headphone each”. The chord sequence is infused with tension, however, as if to show that this kind of “leaping the fence of memory” can’t be accomplished without some pain.

Circus Wagon is more of a parable, with the protagonist joining “a merry band” of acrobats, learning “how to catch a hand while falling through the sky, to dance beyond the you and I…” There’s also room for a charming miniature, Earth And Air, and a fine take on the traditional Rosemary Lane, its Jansch-inspired treatment lifted by invigorating, exploratory percussion and bass from Harris and Amar.

The latter’s louder final minute is as close as we get to Red River Dialect here, and it serves to demonstrate just how different this record is from Morris’ previous work: the songwriting may be similar, his voice just as idiosyncratic, if a little quieter, but the soul-searching intimacy and beautifully unembellished recording results in a completely different beast, fresher, stranger and painfully real. It exists in the moment, just like its creator has been trying to do.