The 1970 classic expanded with demos, outtakes and unreleased material 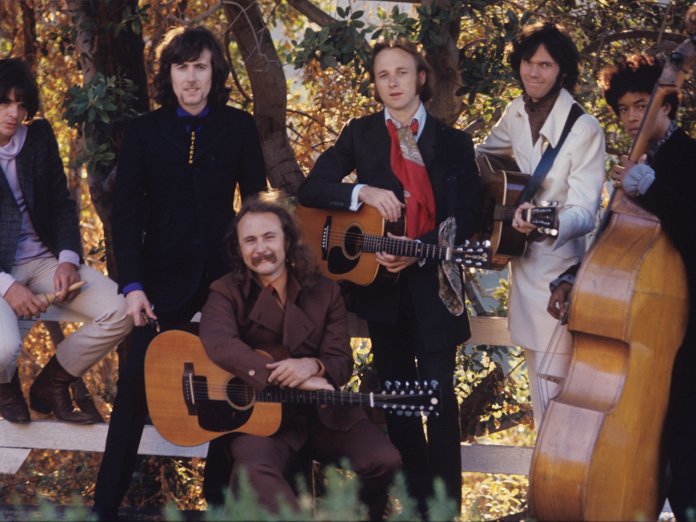 Sometimes, the only way to follow-up a best-selling critically acclaimed album is to do it all over again, only bigger. That’s the approach Crosby, Stills & Nash took in 1970 with their follow-up to May 1969’s Crosby, Stills & Nash. They enlisted Neil Young to expand the trio into a quartet and spent six months hammering out arrangements in the studio, but in most other ways they simply repeated their magic trick of combining “big personalities, pristine voices and achingly personal lyrics”, as Cameron Crowe summarises it in his liner notes. The same but bigger also describes this set, which comes either in a 4CD/1LP version or across five LPs. As well as the original album, there are 38 additional songs, many of which are previously unreleased.

These are divided into three categories, Demos, Outtakes and Alternates. They confirm two things about the sessions: firstly, that all four of the quartet were in the middle of a hot streak where songs were simply pouring out of them; and second, that Neil Young was divided from the rest of the group by more than just an ampersand. He’s always been a noncommittal presence on Déjà Vu, contributing his own two songs – “Helpless” and “Country Girl” – sharing a credit for “Everybody I Love You” with Stills, and adding the occasional guitar lick, but otherwise the junior partner. That feeling doesn’t change after exposure to this edition’s many extras, which again show Young ploughing a lone furrow. There’s a perfect “Birds” with Nash on harmony, which Young was in the process of recording for After The Gold Rush, an alternative version of “Helpless” with harmonica that has been released on Archives 1, and he adds occasional musical support to some of Stills’ compositions. But the bulk of the material comes from Crosby, Nash and especially Stills. These include early versions of several tracks that would soon appear on the trio’s own solo albums.

If Neil Young has always been elusive, Joni Mitchell has previously felt excluded. She was a ghost behind the machine of Déjà Vu, another massive talent only half-inside the tent as the inspiration for Nash’s “Our House” and the writer of “Woodstock”, which was memorably covered by Stills to close Side One. Here, delightfully, she finally has a physical presence thanks to one of two demos of “Our House”, which sees her singing a duet with Nash, giggling when he fluffs a line. It’s one of the highlights of the set, a real peek behind the corner into the soap-operatic personal lives that made Déjà Vu such a hit.

The CSNY sessions started in June 1969 with rehearsals at 3615 Shady Oak Road in Studio City, in a house that Stills had bought from Peter Tork. The trio needed an instrumentalist to fill out their live sound. John Sebastian, Steve Winwood and Mark Naftalin of the Paul Butterfield Blues Band were all discussed before Ahmet Ertegun, head of Atlantic, talked Stills into asking Young, who had walked out on Buffalo Springfield three times in two years.

The first studio session was on July 15 at Wally Heider’s in LA, with Young taking keyboard on a thrilling run through the feisty “Know You Got To Run”, which appears on this set for the first time. The song was later edited together with “Everybody We Love You” to become Déjà Vu’s closing number, “Everybody I Love You”. The next day they recorded two versions of Stills’ haunting “4 + 20”. The first take went on the finished record but the second – included here – is just as good, with a vocal that’s technically superior. Recording switched to San Francisco after CSNY’s appearance at Woodstock, with the final sessions taking place on December 28, 1969 – not quite the last day of the ’60s but close enough for those who enjoy a metaphor.

Stills was a perfectionist – that’s the main cause of his clashes with one-take Neil – so over time the band recorded multiple versions of every song. As well as alternative versions of every album track bar “Country Girl”, including a fab “Woodstock” with an earthshaking Stills vocal and a frantic, fragile “Déjà Vu”, there are numerous songs that would later appear on solo albums, future CSN records or, sometimes, disappear for good. These were often recorded as solo demos, but other members of the group are sometimes present. There’s Nash’s “Questions Why”, a fine lilting McCartney imitation in the classic Nash naïf style, which seems never to have been re-recorded, as well as an early version of “Sleep Song” that he recorded again for his 1971 solo debut, Songs For Beginners. Crosby gives us splendid early versions of “Laughing” and “Song With No Words” – two songs that he would later record for If I Could Only Remember My Name. Some of these were recorded in September for publishing demos by Crosby a few weeks before his girlfriend, Christine, died in a car crash.

Stills’ numerous contributions include the stellar “She Can’t Handle It”, which he recorded as “Church (Part Of Someone)” for Stephen Stills, but the progress of others is less easy to track such is his habit of rewriting and editing lyrics, or taking two fragments and making them into a single song. We know that “Bluebird Revisited”, for instance, later appeared on Stephen Stills 2, but a song like the organ-heavy “I’ll Be There” seems to have vanished. “30 Dollar Fine” is another Stills original that feels half-written – the vocal is unclear and the music is much more of a jam than you usually get with CSNY – but a version did turn up as “$20 Fine” on the posthumous Jimi Hendrix release Both Sides Of The Sky. Another song with a great guitar part is “Ivory Tower”, which was completely rewritten and recorded as “Little Miss Bright Eyes” by Manassas – Stills had written the original lyric about his bandmates and felt he’d been a little harsh, so took his eraser to it. There are more Stills rarities – “Same Old Song”, “Right On Rock’N’Roll” – and the musician accounts for seven of the eleven songs on the outtakes CD, making this something of a Stills mother lode.

Added to these are several completed CSN tracks, complete with the harmonies that brought them together in the first place. Nothing beats “Carry On”, which boasts one of CSN’s most miraculous harmonies. There’s a gorgeous alternative version here with a more pronounced guitar solo, but it’s the voices that compel. Even Neil Young was amazed, telling an interviewer: “There’s a new song called ‘Carry On’ that Stephen wrote,” he said. “And they do a vocal thing in the middle that is one of the best vocal things I’ve ever heard on record… It’s just incredible, man… It sounds like a choir. It’s unbelievable.”