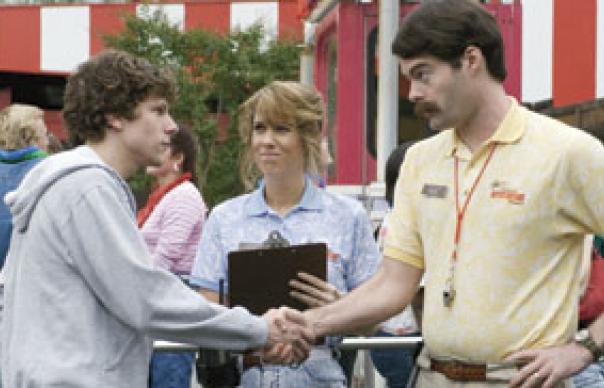 A wry, soulful teen romance with contemporary comedy elements intact, this has more in common with Greg Mottola’s inquisitive 1997 indie debut The Day Trippers than his huge hit, the broad yet big-hearted farce Superbad.

Apart from directing several episodes of Arrested Development, Mottola went quiet between the two, but the success of Superbad gained him the green light to make this semi-autobiographical, coming-of-age piece.

He’s learned how to give big audiences big laughs – Adventureland isn’t averse to a few sex/drugs/puke/punches-in-the-nuts gags – but this is the most reflective offering yet from the Judd Apatow axis. Its total recall of the ardour of youthful infatuation feels closer to something Eric Rohmer might have exhaled, or Linklater’s Dazed And Confused. It’s human, rather than cartoon-like.

It’s Reagan-era, 1987. James (Eisenberg, mainlining the vague, wide-eyed nerd he portrayed in Roger Dodger and The Squid And The Whale) is distraught to discover his parents’ economic woes mean he has to work all summer at a Pennsylvania amusement park, to fund his college future. Torn from his Replacements albums and Henry Miller books, he’s shunted onto a stall where “nobody is allowed to win the giant-ass panda prize”. Initially traumatised, he makes friends among other misfits there.

Where his personality fails, his pot stash succeeds. He falls in love with Em (Stewart), unaware that she’s having a passionless affair with an older musician and bullshitter (Reynolds). “I jammed with Lou on ‘Shed A Light On Love’,” he brags. “It’s called ‘Satellite Of Love’,” points out James. “Right, that’s what I said.” Em’s a mess of contradictions, so James becomes distracted by the carny hottie, of whom a colleague sighs, “That ass is a platonic ideal. A higher truth.”

Around this romantic quadrangle, over-qualified weirdos exchange quips and whines about the futility of existence. One is a Russian comparative literature graduate. “What career track is that?” asks his date. “Hot dog vendor, garbage collector,” he replies, “World’s my oyster.” The park plays Falco’s “Rock Me Amadeus” twenty times daily. “Sadism”, wail our likeable losers.

The surface humour is great (with Saturday Night Live regulars Bill Hader and Kristen Wiig in great form), but beneath the usual study of growing pains and frustrated libidos is shrewd empathy for the characters. Most of them learn something from this hothouse summer, but, realistically, some don’t.

There’s a keen sense of place, that place being Nowheresville, and of time (reinforced by a splendid soundtrack, and a score by Yo La Tengo). Much like its anti-hero, Adventureland is at first too gauchely intelligent for its surroundings, then learns to merge the best of what it is and what it isn’t. Gentle is the new gross, it seems.