Duo continue to explore global sounds on their third 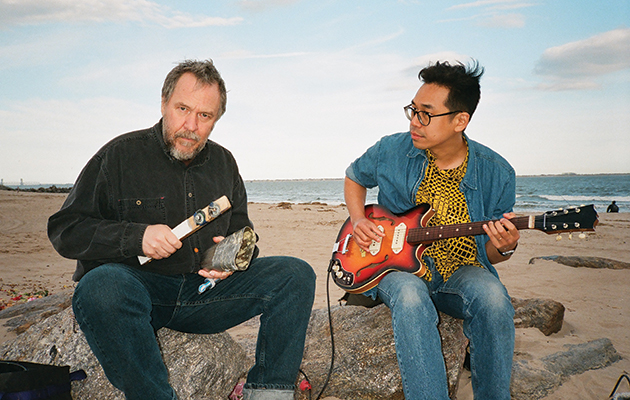 It seems that both guitarist Che Chen and percussionist Rick Brown baulk at their music being described as blues; but it’s not because they have lofty pretensions or lack respect for the most elemental, culturally pliable and migratory of genres – they just see it as category error. Minor pentatonic scales – common to the folk music of places as unalike as Bamako and Chongqing, Kilkenny and Kabul – are a key element of the New York duo’s intensely absorbing instrumentals, more familiar due to their migration to the Southern US states and reincarnation as what we call the blues. Chen’s time in Mauritania in 2013, where he studied guitar with master Jeiche Ould Chigaly, has clearly made its mark, too.

But however you label it, there’s no denying the ecstatic power of Brown’s deceptively simple, plywood-crate thwackings, bells and rattles, with Chen’s subtle but insistent manipulations of drones, open tunings and overtones, exercised in a seemingly infinite number of patterns and at frequently epic length. Wrangled over two full-length official LPs – 2015’s Wooden Bag and Wood/Metal/Plastic/Pattern/Rhythm/Rock from 2016 – theirs is a particular kind of elegant primitivism, both trippily transcendental and rooted to the earth in a truly profound way. Despite loose kinship with the likes of Sir Richard Bishop, Steve Gunn and Henry Flynt, 75DB are really out there on their own. Their sound hypnotises in much the same way as a car’s headlights fatally hypnotise a deer: the mesmerism is pure, neuro-physical reaction, not a choice.

On I Was Real (not a Zen koan but the misremembering of an old Motown song title, apparently) they shift ground significantly while cleaving to their core, in changes that are as much operational as conceptual. Most significantly, maybe, there are eight extra players in various combinations, including repeat collaborators Steve Maing (quarter-tone guitar), Sue Garner (guitarist/bassist and Brown’s wife) and saxophonist Cheryl Kingan.

The set runs at 79 minutes over nine tracks, was recorded over a four-year period and sees the pair cannibalising and/or reconfiguring earlier material for major studio in(ter)ventions. “C Or T (verso)” was “realised” by the pair – both reject the title of producer and the album credits deliberately omit any mention – using what Chen calls “spare parts” from the backwards intro to opener “Every Last Coffee Or Tea”, while “New New/The Worm/Like Laundry” is a suite of sorts, connecting several sections of the album in different keys with an extended chord change. And the intro of “WZN#3 (verso)” is a “ghost” of the outro – what remained when the original double guitar/bass part that several players overdubbed was removed. Which seems like both a wilfully awkward way of making a few minutes of new music and exactly the kind of thing that would please veteran explorers.

These studio techniques are quite a shift from 75DB’s usual unmediated sound, but the results are absolutely one with the set’s overall sensual delirium. The centrepiece is the title track – at 17 minutes comparatively short, given that live, it’s sometimes stretched out to 30 – and it’s a triumph of almost funereal drone featuring two super-subtle tonal shifts on Chen’s 12-string, the whole anchored by Brown’s nimble, polyrhythmic pulse.

Equally strong and dizzyingly pleasurable is “Every Last Coffee Or Tea”, which is from their 2013 self-released Cassette, but rearranged here for six players. It features a multiplicity of overlapping and heavily rhythmic, improv guitar, upright bass and amplified viola parts, plus a reassuringly thumping pulse – together, a masterclass in delayed gratification that conjures up a desert ceilidh. “Tetuzi Akiyama” (after the Japanese avant guitarist) is very different, with its unarguably bluesy, percussive stomp and hammered central riff leading what you’d swear was a dozen guitars, as is the uncharacteristically frantic “There’s No Such Thing As A King Bee”, an impromptu studio jam with hissing hi-hat.

The album’s closer is the terrific “WZN#3”, which is a reference to Chen’s time in Mauritania and has been played  by more band permutations than any other 75DB piece. In tunings so open you can almost feel a breeze blow through, Chen’s and Maing’s guitars establish a thrillingly repetitive, seesaw dynamic whose relaxed feel belies the intuitive control needed to sustain it, twangling away as if in a trance and connecting West Africa to the Appalachians.

These are ageless, thrillingly energised devotionals for our secular and fast-moving times, full of euphonious noise and the dust kicked up by their deep-dug grooves. Somehow, 75 Dollar Bill push forward even while their music hovers in the eternal present.