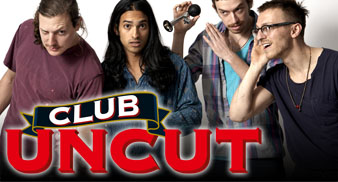 Yeasayer have been confirmed today as the next headliners of Club Uncut.

They will play King’s College on Surrey Street in London (as opposed to our regular venue of the Borderline) on Wednesday August 20. An Evening With Yeasayer follows previous sold-out Club Uncut nights featuring Joan As Police Woman, Okkervil River and, earlier this week, White Denim.

Yeasayer, as you probably know, are one of the finest new bands to emerge in the last 12 months or so, a fearlessly eclectic quartet from (inevitably) Brooklyn. When we featured them in Uncut back in January, Sam Richards wrote, “They pass world music and experimental rock through the stadium-pop filter of Peter Gabriel, arriving at a kind of awesome apocalyptic soul not a million miles from that of fellow Brooklyn voyagers TV On The Radio.”

As their superb debut album, All Hour Cymbals, proves, Yeasayer are a genuinely psychedelic proposition, and we’re honoured that they’ve agreed to play at this, our biggest Club Uncut yet.

Tickets cost £11, and Uncut’s exclusive allocation are available from 9am tomorrow (Friday August 18) at www.seetickets.com.

The show is open to anyone over 14, though under 16s must be accompanied by an adult.