Apparently it's been shipped to Bob...

The website, an offshoot of The Onion, launched a GoFundMe page two weeks ago, outlining their aim.

A message on the crowdfunding website read: “For over 50 years, Bob Dylan has been one of the most celebrated figures in American music… He has given us everything while asking nothing in return, and for that, we think it’s about time that America said ‘thank you’ for all his contributions to our ears and our hearts.”

“Hence, we have started this GoFundMe page with the goal of purchasing Bob a brand-new Sleep Number® adjustable bed. This includes a classic c2 Sleep Number® mattress, a sturdy modular base, and an intuitive wireless remote for adjusting the bed’s firmness.”

Having raised a total of $1,555, the website recently claimed that they’ve shipped the bed to Dylan. “Bob’s bed officially shipped over the weekend,” a message posted to Facebook read.

“Also, the beautiful Bob Dylan duvet cover that we purchased with the extra funds was delivered this morning and signed for by someone named “F Lamb”—perhaps the pseudonym Bob uses when he travels? Who’s to say?!?
Thanks again for all your support! We couldn’t be more excited. ?#?BedForBob?” 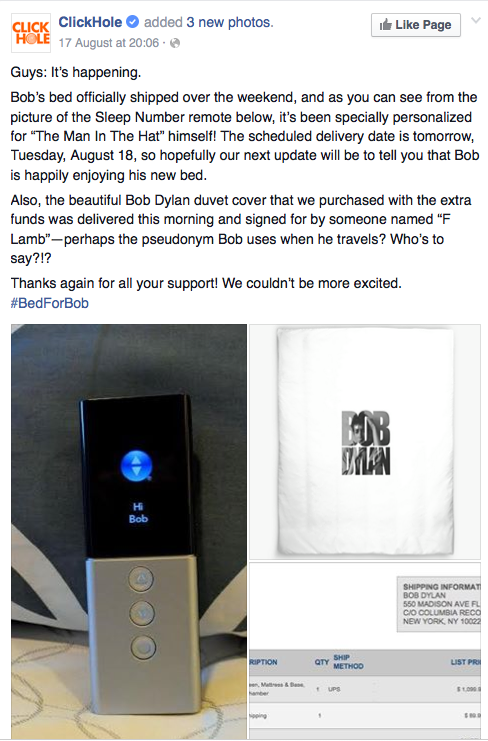 Yesterday – Tuesday, August 18 – the site confirmed the bed had been delivered to Dylan’s label, Columbia Records. 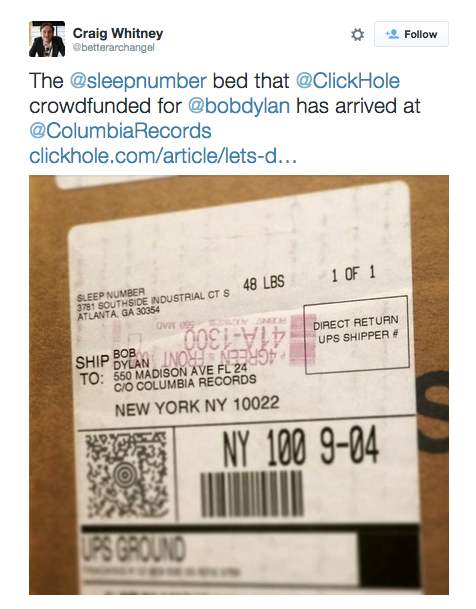 In other Dylan news, a special edition of DA Pennebaker‘s documentary Dont Look Back is to debut in November, with a number of new extra features.

This new edition from the Criteron Collection features more extras than have been included in previous releases.

Examiner reports that the upcoming Blu-Ray and DVD editions will each feature a new digital transfer, improved audio and new artwork, as well as interview with Patti Smith about the influence of the film.

The release date for this new edition is November 24, 2015. You can pre-order it by clicking here.

Dylan is due to play a number of UK tour dates in October, including three nights at London’s Royal Albert Hall.

In related news, Dylan producer Bob Johnston died last weekend: as a tribute to his great work with Dylan, Leonard Cohen, Johnny Cash and more, here’s an interview with Johnston from 2014 from the Uncut archive.