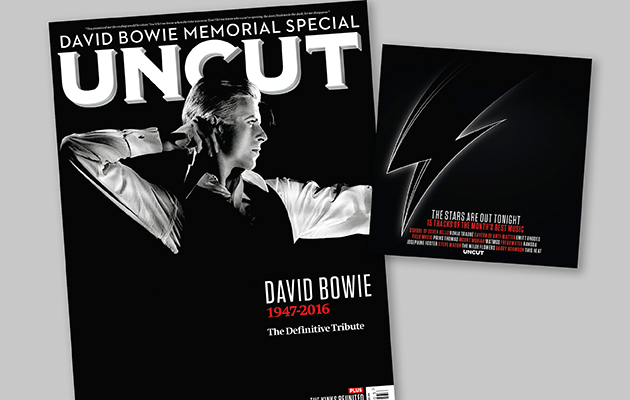 In the new issue of Uncut, we pay tribute to David Bowie with 19 pages on the great man, who of course passed away on January 10, two days after releasing his stunning new album, Blackstar.

Inside the issue, many of his collaborators, including Carlos Alomar, Reeves Gabrels, Nile Rodgers, Mike Garson, Ken Scott and Herbie Flowers, remember Bowie, while Uncut’s David Cavanagh pens a fascinating essay on his life and legacy.

“He wanted music that was on the cutting edge,” explains Let’s Dance producer Nile Rodgers, “that made people feel uncomfortable, but compelled then to listen.”

Also in our expansive Bowie piece, former Uncut editor Allan Jones remembers being sucked into a nasty tiff between Lou Reed and Bowie in April 1979: “The next thing I know, Lou is dragging Bowie across the table by his shirt and smacking him in the face…”

Also in the issue, Loretta Lynn looks back on her sparkling career, her wayward spouse, her legendary friends – from the Cash family to Jack White – and the spirits that surround her to this day.

Meanwhile, Uncut heads to Sunderland to meet the Prince-approved Field Music, and hear about their new album, Commontime, and the “ridiculous” nature of being in a band.

50 years on from Tim Hardin’s debut album, Uncut considers the singer-songwriter’s extraordinary music and harrowing life story. A tale of blood, arson, rooftop chases, Olympian drug abuse, bespoke carpentry and a deathless legacy of songs. “He was truly the wildest guy I’d ever met,” says one old friend. “It didn’t seem like anyone else’s rules of behaviour worked for him.”

Elsewhere in the new issue, The Pop Group take us through their intense, political 1979 single “We Are All Prostitutes”, and Mavis Staples – ahead of the release of her new album, Livin’ On A High Note – recalls the greatest records of her career, from The Staple Singers’ Freedom Highway to her Jeff Tweedy-produced You Are Not Alone.

Soundtrack composer and former Pop Will Eat Itself member Clint Mansell answers your questions, and Lucinda Williams outlines her life in music, while we meet new artists Floating Points and Cavern Of Anti-Matter, speak to Dave Davies about his onstage reunion with brother Ray to perform a Kinks classic, and talk to the returning Grant Lee Phillips, all in our front section.

We also review new DVDs about The Residents, Tubby Hayes, and The Last Panthers and Sicario, new films including Janis: Little Girl Blue, A Bigger Splash and Hitchcock/Truffaut, and books on Louisiana’s swampy musical heritage and Bowie’s Beckenham Arts Lab.