The new issue of Uncut, out today (September 21), features The Byrds, Neil Young, Siouxsie & The Banshees and LCD Soundsystem. 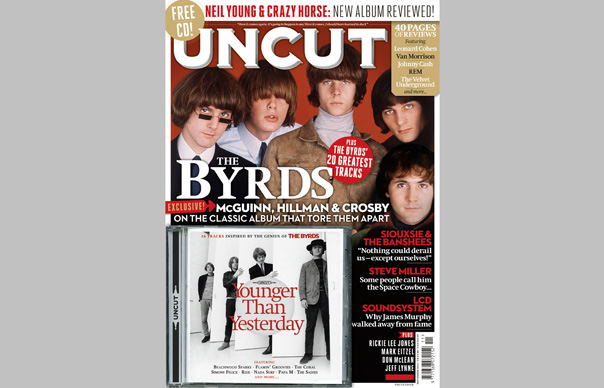 The new issue of Uncut, out today (September 21), features The Byrds, Neil Young, Siouxsie & The Banshees and LCD Soundsystem.

The Byrds are on the cover, and inside, Roger McGuinn, David Crosby and Chris Hillman discuss the tumultuous, highly creative period leading up to their classic 1968 album, The Notorious Byrd Brothers.

By its release, Crosby and Michael Clarke were gone, and the group had embarked on a whole new trip into cosmic Americana. The Byrds’ 20 greatest songs are also counted down, chosen by the likes of McGuinn, Hillman, Crosby, Bobby Gillespie, Emmylou Harris and Van Dyke Parks.

Neil Young and Crazy Horse’s Psychedelic Pill is reviewed, Siouxsie & The Banshees’ wild, self-destructive time during the making of A Kiss In The Dreamhouse is examined, and James Murphy explains his career options now he’s broken up LCD Soundsystem.

Elsewhere, Mark Eitzel takes us through the best of his own albums, Don McLean delves into the dark heart of “American Pie” in this month’s Making Of…, Steve Miller recalls the highs and lows of The Steve Miller Band, and Rickie Lee Jones answers your questions in An Audience With…

The news section features Prince, Jah Wobble and Keith Levene, Cody ChesnuTT and the return of the Uncut Music Award.

As well as Young, the 40-page reviews section puts the likes of Donald Fagen, ELO, Bat For Lashes, Van Morrison, The Velvet Underground, REM, Peter Gabriel and Johnny Cash to the test.

The live section features reviews of Leonard Cohen, End Of The Road Festival and At The Drive-In, while the film and DVD section looks at The Beatles’ Magical Mystery Tour and On The Road, among others. Books reviewed this month include Peter Hook’s Joy Division book and Barney Hoskyns’ oral history of Led Zeppelin.

The issue’s free CD features a host of artists inspired by The Byrds, including Beachwood Sparks, the Flamin’ Groovies and The Coral.