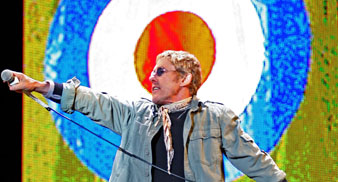 The Who‘s frontman Roger Daltrey has revealed that the band’s touring schedule has in the past left him feeling “seriously ill”.

The singer, who recently revealed that he had an operation to remove a pre-cancerous growth on one of his vocal cords, claims that his health really suffers when he is on the road.

“I was having terrible trouble hearing what I was singing and it did get to me,” he said. “In fact, I’ve been suffering for quite a few of the previous tours. I never understood that if you sweat as much as I used to every night, you drain your body of salts.”

He added: “So I got very, very, seriously ill. I got to the stage where I was almost hospitalised with serious problems.”

Daltrey also said he was worried about bandmate Pete Townshend‘s hearing. The guitarist has endured a long battle with tinnitus throughout his career.

“Pete is having terrible hearing problems at the moment,” he told Rolling Stone. “There’s nobody I’d rather be on stage with than Pete. But equally, I don’t want to be on stage with him destroying the last bit of his hearing. That would be completely foolish. He’s a composer.”

Despite the pair’s health problems, The Who frontman says they have no plans to retire.

“We’re in the last bits of our career,” he added. “I feel that we owe it to the public that supported us all these years to go down with us.”