The Rolling Stones last night (November 29) played the second of two shows at London's O2 Arena in celebration of the band's 50th anniversary. As per their show on Sunday, this was to be a hit-packed, guest-filled evening, with the return of Bill Wyman and Mick Taylor plus first-time guests Eric Clapton and Florence Welch of Florence And The Machine. Scroll down the page to see fan shot footage of Florence performing 'Gimme Shelter' with the band. 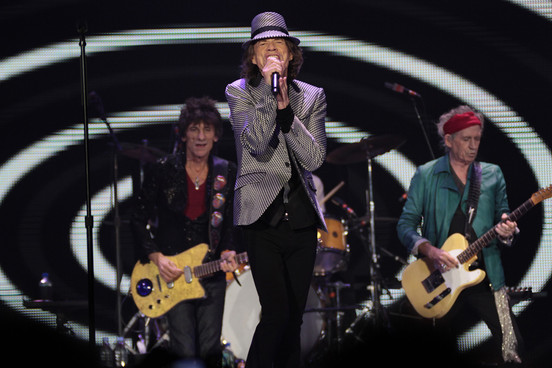 The Rolling Stones last night (November 29) played the second of two shows at London’s O2 Arena in celebration of the band’s 50th anniversary.

As per their show on Sunday, this was to be a hit-packed, guest-filled evening, with the return of Bill Wyman and Mick Taylor plus first-time guests Eric Clapton and Florence Welch of Florence And The Machine. Scroll down the page to see fan shot footage of Florence performing ‘Gimme Shelter’ with the band.

The show began just before 8.30pm with an introductory video featuring Johnny Depp, Pete Townshend and more talking about the Stones. Iggy Pop said: “We’d never seen people with teeth like that. And skin like that. Ugh!” He also said: “The sound of Keith’s guitar – it was like being hit with a dead mackerel”.

After the video and a procession of drummers wearing gorilla masks, the band took to the stage, and the entire crowd rose to its feet.

The Rolling Stones began with ‘Get Off My Cloud’ and Beatles cover ‘I Wanna Be Your Man’, after which Mick Jagger – dressed in a shiny silver jacket – said, “blimey that’s an old song. It’s ancient. Back then, the price of a pint of milk was three pence, the price of a loaf of bread was sixpence and the price of a concert ticket was… I’d better not go there…”.

He later made reference to the fact that their set was cut short on Sunday night, saying, “We’re more relaxed tonight, we’ll get to play the whole thing. We had to pay £100,000 because we went on too long. That’s like… Ten seats!”

After, Jagger spoke of his connection to the area. “It’s close to where Keith and I grew up in Dartford, but it seems a long way from exchanging records at the station. Have you still got that Bo Diddly record Keith?”

Keith Richards and Ronnie Wood both took seats to play acoustic guitars on the version of ‘Lady Jane’ that followed. “We haven’t played that one for a while… In public,” said Jagger after.

Jagger then introduced guest Eric Clapton, who played blues guitar on ‘Champagne And Reefer’. Clapton’s presence seemed to breathe life into Richards, who himself took a solo for the first time of the night.

Throughout the evening, the stage set – a giant pair of lips plus tongue catwalk – changed as curtains were raised revealing a larger video screen.

Jagger picked up the guitar for disco track ‘Miss You’, after which the band played new tracks ‘One More Shot’ and ‘Doom And Gloom’.

While introducing the band, Jagger joked that they’d be “all down the Indigo Club after – it’s just round the corner.” Keith Richards received the biggest cheer of all, and took lead vocals for ‘Before They Make You Run’.

The encore began with a chamber choir singing the intro to ‘You Can’t Always Get What You Want’, then ‘Jumping Jack Flash’ and ‘Satisfaction’ – the song that was cut from Sunday’s show due to time constraints.