The B-52s Get Into Lovebox

The original new-wavers are coming to Hackney this July 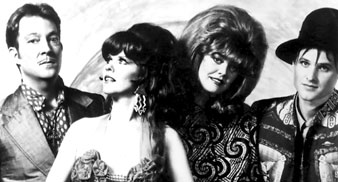 The B-52s, The Rapture and Tinariwen are amongst the diverse and stellar line-up just confirmed for this Summer’s Lovebox Weekender at London’s Victoria Park.

The 30,000 capacity, two-day event, now in it’s fifth year, takes place on July 21 and 22 and will see some of the biggest names from around the world play.

Artists announced today for the celebration of music and culture are organisers Groove Armada who will close the bash on the Sunday night, and Toots & The Maytals, Layo & Bushwacka, James Yorkston, Tinariwen and Tiga.

This will be the B-52s first UK performance in several years. As previously reported, the band are currently working with New Order’s producer Steve Osbourne on their first album since 1992’s “Good Stuff.”

Tickets for Lovebox will go on sale next Tuesday April 3 at 9am, priced £35 per day or £60 for the whole shebang.

More information about the love-in are available from loveboxweekender here