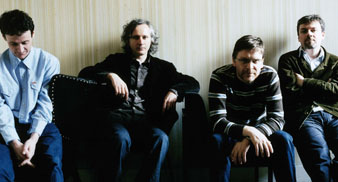 Teenage Fanclub closed the second and final day of the Truck Festival in Oxfordshire last night (July 25) with a 20-song set as the event marked its 13th birthday.

Fucked Up, Pulled Apart By Horses and Blood Red Shoes also played at day two of the festival.

Performing the event’s main stage, the Glasgow band had played a career-spanning set, which featured six songs from their new album ‘Shadows’.

The headliners were clearly a popular choice, with fans in the crowd waving banners declaring T.F.C. I love you at the Glasgow band throughout their set.

Earlier in the day, Future Of The Left played in the event’s Barn venue, performing crowd favourites including ‘Manchasm’ and ‘The Hope That House Built’.

Andy Falkous joked to the audience: “Hello Truck Festival on this Sunday. You should be ashamed of yourself – on the Lord’s day!”

Meanwhile, Blood Red Shoes were joined on the Truck Stage by Pulled Apart By Horses at the climax of their set, when both bands took apart the drumkit and dived into the crowd. Pulled Apart By Horses had earlier played their own set on the Barn Stage, with singer Tom Hudson telling the sweaty crowd: “It’s great to be back! The smell of beautiful shit in the cow shed.”

Later she appealed to the audience for help: “We were at Secret Garden Party yesterday and I think our bassist and keyboardist need some tender loving care, so if anyone’s a masseuse or has got a hangover cure, they need you!”

The day beforehand (July 24), [url=http://www.nme.com/news/mew/52207]the opening day of Truck Festival had seen performances from the likes of Good Shoes, Ms Dynamite and Mew[/url].