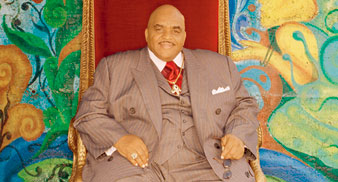 Solomon Burke‘s family have announced that he died of natural causes.

The 70 year-old singer’s passing was announced yesterday (October 10), although a cause of death was not confirmed at the time.

Writing on Thekingsolomonburke.com, Burke‘s family explained that “the legendary King of Rock & Soul, Solomon Burke, our father, passed away due to natural causes. Solomon had just arrived at Schiphol Airport in Amsterdam, the Netherlands for a sold-out show at Paradiso with Dutch band, De Dijk. He was on his way to spread his message of love as he loved to do.”

The family – Burke had 21 children and 90 grandchildren – also thanked fans for their support following the announcement of the singer’s death.

“This is a time of great sorrow for our entire family. We truly appreciate all of the support and well wishes from his friends and fans,” they wrote. “Although our hearts and lives will never be the same, his love, life and music will continue to live within us forever. As our family grieves during this time of mourning, thank you for respecting our privacy.”