To celebrate the 50th anniversary of Small Faces’ landmark album Ogdens’ Nut Gone Flake, various deluxe editions of the album will be available from September 28.

The 3CD+1DVD set comprises both original mono and stereo versions of the album together with a third CD that boasts an expanded version of the vinyl box-set’s bonus LP disc, additionally featuring gems such as the rare American single versions of “Mad John” and “The Journey” plus the mono “Afterglow Of Your Love (Alternate Single Mix)”. The contents of the vinyl book are also reproduced while the DVD boasts features the June 21, 1968 edition of BBC TV’s Late Line-Up Colour Me Pop show.

All editions have been assembled by graphic designer Rachel Gutek who has had access to the Immediate Records original artwork files. 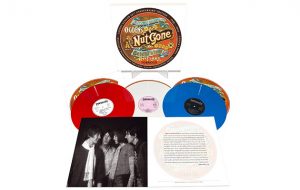 You can see the full tracklistings for the various formats and pre-order them here.