Hey, you guys! James Mercer and co open End Of The Road with "first proper show in years" 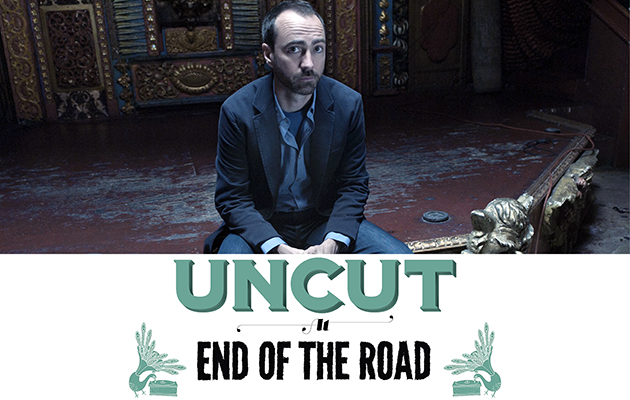 Like the first day of any festival, there’s a fresh, unwrapped feeling to the opening acts of The End Of The Road 2016. Tonight, the site feels pristine. On rolling, unchurned grass the tents look neatly pitched. As well-provisioned bags are unpacked, many festival goers are getting their bearings, from the bookstore to the gin-and-tonic shack. The site is not yet busy: spotting the lack of a queue, one man ambitiously orders two Vodka Red Bulls at the Real Ale Only bar.

The headline act for their first gig in the UK in four years, is, of course, The Shins. And once he’s settled into the set, frontman James Mercer reveals he’s done some undercover reconnaissance: “I took a walk around earlier,” he says.” This is a beautiful place, and we’re really, totally happy to be here. This is our first proper show in years.”

You can tell. This won’t be the best, most polished gig The Shins ever do – there’s very much the sense of a road-test, of feeling their way. But there is also something celebratory and consistently joyous about the Portlanders’ return to major live performance, here at the dying days of the British summer. The Shins open politely with the clean strikes of “Kissing The Lipless”, from 2003’s Chutes Too Narrow, before Wincing The Night Away’s “Phantom Limb” kicks in, its greater sonic range and insistent melody visibly lifting both crowd and band. There is a new album due soon. But on this evidence, new material will be drip-fed rather than force-fed to a crowd comfortable with the back catalogue. For those hoping for exclusives, much of this set is heritage Shins, drawn across their four extant albums.

Soon everyone begins to relax. He’ll never be make-‘em-smile showbiz, but Mercer is a genuine, warm frontman, and following “Girl Inform Me”, there’s spine enough to introduce “some new stuff”. He’s delighted at the whoops in response. This new song may or may not be called “Figment Of Imagination” (that’s the hook lyric, but Mercer has never been one for an obvious title), and it’s a curious piece of big music, ushered in by a mesh of tribal-glam-rock drums. Mercer’s a studied pop classicist; perhaps he’s been investigating 2-Tone and ska, because “Figments” has a stop-start bounce, a pert, pogoing melody. There’s experimental drama, too to another theatrical new number – title missed, lost or unspoken – which has mouth-twisting lyrics about Paul Simon’s “50 Ways” being wrong, bubblegum woos, and some on-the-beat head-nodding like McCartney circa Hard Day’s Night.

The Shins grow in confidence with each song, powering past “Sleeping Lessons”; “Australia”, “Saint Simon”, Mine’s Not A High Horse”. The banter gets better. Mercer takes his shirt off to wolf-whistles; some muso doodling is jokingly dismissed as “some Richard Marx shit – maybe that could be a hit!”. You can hear the band tighten itself during the set. It’s on the woozy “Sea Legs” – and, tellingly – on Port Of Morrow’s brilliant “Rifle’s Spiral” where this newer incarnation excels; these songs’ greater sonic range filling the stage, and the air.

Suddenly, they are gone, offering “Caring Is Creepy” before leaving the stage as a unit. We are made to wait – and wait – for an encore. First a sheepish Mercer ham-fists the intro to “Your Pilgrim” (“I haven’t played this song in like eight years”), before 2014’s “So Now What” – widescreen pop from the Zach Braff movie Wish I Was Here. Then what many here were waiting for: “New Slang” – the song that appears to have changed many people’s lives, not just those who fell in love with The Shins circa Garden State. By the final bars of “Simple Song”, the audience – some young, some old(er), some Richard Marx fans, apparently – are streaming back to the bars, and the neat tents, and The Shins have passed the test.

“Thank you so much. Have fun, you guys”. Winningly, James Mercer says farewell like an American Mom packing the kids off to camp. Which in some ways, he is.