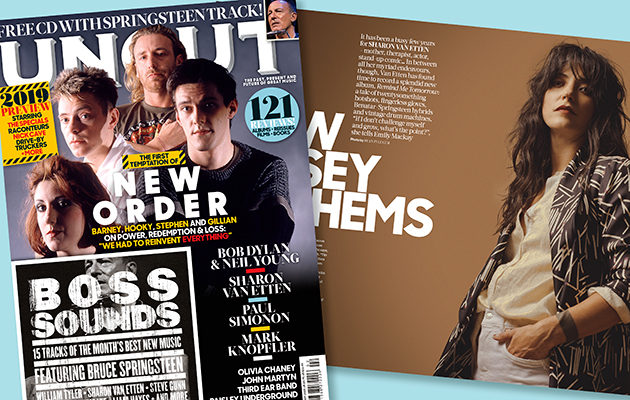 Sharon Van Etten’s splendid new synth-driven album Remind Me Tomorrow is out on Jaunary 18 via Jagjaguwar.

In the latest issue of Uncut – in shops now and available to buy online by clicking here – she reveals the reasons behind this radical, positive reinvention. They include falling in love and becoming a mother, as well as productive forays into acting, academia and – most impressively – standup comedy.

“My babysitter put on a variety show, and she asked me to perform,” she explains. “I had a solo show testing new material a week after, so I wasn’t really interested in picking up an acoustic guitar… I texted her and asked, ‘Can I try doing some standup?’ And she was like, ‘Are you kidding me?’” And so Sharon Van Etten made her nerve-racking standup debut, notes in hand. “It was anecdotal reports about being myself… a lot of rambling. It was really, really fun. It felt like the first day at school… not reinventing myself, but new.”

As for the mindset behind the new album, Van Etten says: “I’m in a really good place, I’m happy, I’m secure, I’m in love and I’m doing all the things that I’ve set out to do and more. And… I’m still writing heavy songs! But they’re not coming from a place of unhappiness. Maybe unease or insecurity – but not about my life, more about the world. Like, ‘How I’m gonna raise a child in a positive way with all the things that are going on?’”

Opening with driving synths and big rock drums, current single “Comeback Kid” sets the tone. It shows her voice in a new light, at once sultry, bullish and bruised. She describes it as “my New Jersey anthem… like if Pat Benatar and Bruce Springsteen wrote a song together… The story is about returning home and confronting people that you used to know. Like, ‘I was a fuckup, but I’ve got my shit together and I’m in a different place now…’ Moving forward but acknowledging your demons.”

You can read much more from Sharon Van Etten in the new issue of Uncut, in shops now with New Order on the cover.