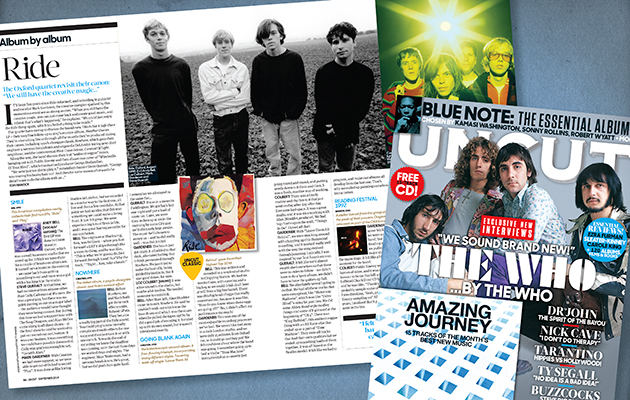 The current issue of Uncut – in shops now or available to buy online by clicking here – features an Album By Album interview with dreamy Oxford rockers Ride.

The band look back on all their long-players, from early compilation Smile to latest effort This Is Not A Safe Place. However, it’s their kaleidoscopic second album Going Blank Again that we’ve selected as our ‘Uncut Classic’.

A free-flowing triumph, incorporating many different styles and yielding the towering Top 10 hit “Leave Them All Behind”, Ride reveal how it was made:

ANDY BELL: This was written and recorded in a residential studio in Chipping Norton. We had six weeks there, with catering and a big keg so we could drink draft beer at will from a big free barrel. There was this big bowl of eggs that really concerned me, because it was like, “How do you know when these eggs are going off?” No, it didn’t affect my performance too much!

MARK GARDENER: This was one of the most enjoyable recording processes we’ve had. We weren’t locked away in a dark London studio, and we were only 25 minutes from Oxford too, so I could go and buy pot! We felt confident about where the band was going. I remember going up to bed with the “Time Machine” instrumental on a cassette just going round and round, and putting words down to it there and then. It was a fresh, reactive way of working.

LOZ COLBERT: There was a lovely routine and rhythm to it that just went on day after day after day. Everyone had space. It was a great studio, and it was nice working with Alan [Moulder, producer]. We had big charts up on the wall, “Things To Do”. I loved all that!

GARDENER: With “Leave Them All Behind”, we were mucking around with chopping up this Hammond recording, and it worked really well with the way the song evolved through jamming. Lyrically, I was inspired by our first American tour.

BELL: We absolutely weren’t going to do that. We had all these tracks that were conceptual, like “Motorway Madness”, which was like “Drive Blind”’s noisy bit part two. We did some Abbey Road-style medley things and some of it got used at the beginning of “OX4”. There was “King Bullshit”, this ambient reggae thing with an AR Kane vibe that ended up as a part of “Time Machine”. They were all tracks  that had their own qualities but we ended up squashing loads of them together. It was all based on the Beatles model: it felt like we had to progress, and make our albums all develop from the last one. That’s why we ended up painting ourselves into a corner.

You can read Ride’s take on the rest of their discography in the current issue of Uncut, out now with The Who on the cover.