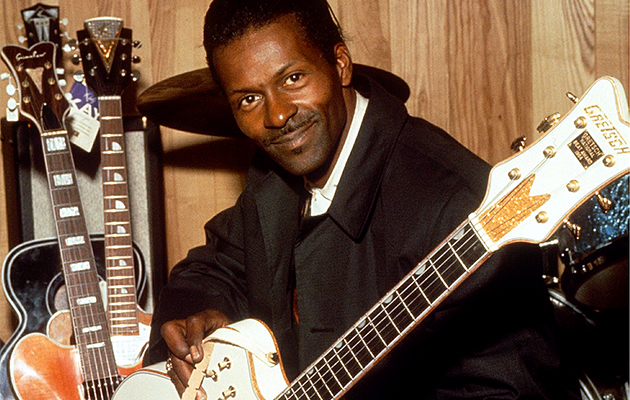 Brian May has written a lengthy tribute to Chuck Berry on his website.

May initially Tweeted his response to the news of Berry’s death:

Rock and Roll grieves tonight as our hero Chuck Berry steps into the next world. We salute you… https://t.co/8ySfV7Jkkb

Following that, he wrote a more extensive piece on BrianMay.com: “it’s very hard to convey how revolutionary this man was – how outrageously original and daring – how shocking it was for the world to witness people like Chuck smash the existing world order of popular music into bits.”

Although the pair never met, May compares Berry to a “root” and “a source of the river”.

He finishes by calling Berry “the greatest inspiration to us all.”

Read the full tribute below:

I was shocked to hear he’d gone. And then you get that haunting feeling that you didn’t think of him for ages, even though he was a massive influence on your life. I never met Chuck Berry, sadly, but in a way maybe it’s better I remained the fan at a distance that I always was, from the very beginnings of my own love affair with the guitar.

As always when talking about the 1950s, it’s very hard to convey how revolutionary this man was – how outrageously original and daring – how shocking it was for the world to witness people like Chuck smash the existing world order of popular music into bits.

There’s a great sequence in the wonderful Back to the Future film, where a young Marty McFly picks up a guitar, sits in with a smooth dance band of the day, and rips into a Chuck Berry riff – morphing the band into a Rock outfit in an instant, and setting the whole place alight. The delicious joke is that Chuck Berry hears this on the phone and learns this way of playing from Marty. It’s a very subtle piece of tongue-in-cheek filmic history-rewriting, and of course Chuck was in on the gag. It has a real truth embedded in it, too, because, as far as I know, nobody knows where or how Chuck got inspired to play like that. It’s as if he must have tuned in to an alien, or a voice from Above, or, like in this film, copped it from a time traveller from the future.

That’s how blindingly NEW Chuck Berry’s style was. Remember we’re coming out of an era where the guitar was only just starting to be heard as a lead instrument – a ‘voice’ – in popular music. Until that time it had been used in orchestras and big bands purely as a rhythmic ‘chug’ in the background, until it became electrified, and amplified – notably by Les Paul, but equally notably by Django Reinhart. Suddenly here is this wiry little black guy with a wicked smile and a glint in his eye, singing his own songs which are in themselves quite risqué, with a wry dry voice, but also underpinning his performances and recordings with a guitar which rudely led the whole thing … his riffing was as rude and cheeky as his voice. It’s actually more than this. He hit those tight top strings of his guitar with such gusto that they actually made a kind of insistent clanging sound (one of his most famous lyrics (in Johnny B. Goode) says “He could play that guitar like ringin’ a bell”. I sincerely believe there is not a single rock guitarist in the world who hasn’t been influenced, directly or indirectly, by Chuck Berry’s ‘bell’ playing, and who hasn’t occasionally dabbled in his trademark double-stopped riffing style – which opens Johnny B Goode, Bye Bye Johnny, Carol, and many others among his classic rock records.

Yes, I’ll own up straight away … there’s a very deliberate direct quote in my playing in the coda of ‘Now I’m Here’ – followed by another nod … the thrown-in chorus “Go go go little Queenie”. This was in a song which was already a tribute to Mott The Hoople, whom we’d been supporting on tour, and who also can trace some of their influences to Chuck. The whole song is really about our swim in the Rock River which flows, and grows, and lives, largely because it IS so self-conscious about enjoying its roots.

Chuck was a root. Or to continue mixing metaphors, to us all, a source of the River. Who knows how the River got to him, but he was a fundamental creator of Rock and Roll, and it’s significant that his lineage was much closer to the authentic Blues of Muddy Water, Blind Blake, Howlin’ Wolf, Lonnie Johnson and the like, than his contemporaries, the white boys who became intoxicated with that earthy realism, and stood alongside Chuck as the Fathers of Rock – Elvis, Buddy Holly, Rick Nelson, Jerry Lee Lewis, etc. How incredible it was for us young kids to be witness to this explosion. Little Richard was the other wild man … listen to a Johnny Ray tune, or Perry Como, and then put on Little Richard’s ‘Good Golly Miss Molly’ or Chuck’s ‘Nadine’ – and feel the shock !

Interesting that the same Back to the Future sequence has an equally smart ending – Marty turns up his amp further to distort and sustain, and launches into a Ed Van Halen tapping extravaganza (EVH himself did the dubbing), and the band – and the kids – just don’t get it – they were not ready to see THIS far into the future !

And it’s interesting to note that Jimi Hendrix played a blistering rendition of Johnny B Goode (check him out live on Youtube) – done with obvious reverence, and yet bringing the technique forward into an entirely new place. We’re seeing Quantum leaps here … From Swing to Chuck Berry, to Jimi Hendrix, to Ed Van Halen – all players who sensationally broke all the rules of the game as they entered it – and made unholy splashes in the River !

Well, I’m off to play some Chuck Berry records before I go to sleep tonight. I wanna relive those moments, and pay my own private homage to the Great Chuck Berry.

Rock and Roll grieves tonight as our hero
Chuck Berry
steps into the next world.

We salute you Chuck –
the greatest inspiration to us all.