R.E.M. reveal the secrets of their unlikely rock masterpiece in the latest Uncut 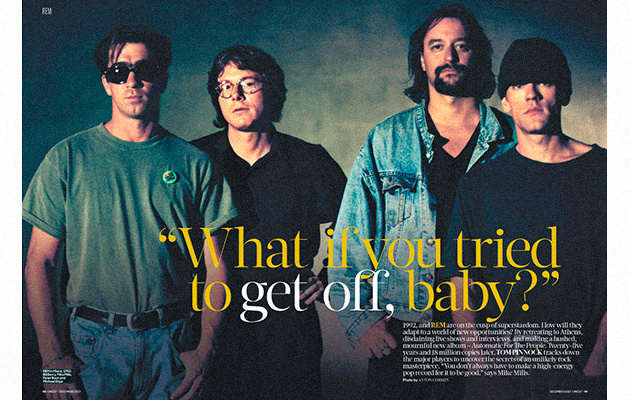 1992, and REM are on the cusp of superstardom. How will they adapt to a world of new opportunities? By retreating to Athens, disdaining live shows and interviews, and making a hushed, mournful new album – Automatic For The People. Twenty-five years and 18 million copies later, Uncut tracks down the major players to uncover the secrets of an unlikely rock masterpiece.

For Peter Buck, success was a hard quality to quantify. “We were living in the same houses, driving the same cars,” he says, thinking back to 1991, the year Out Of Time broke REM. “So  it didn’t occur to us that things had changed substantially – and they hadn’t, in a lot of ways.”

Exhausted after 1989’s intense Green World Tour, the group decided not to perform live in support of Out Of Time, and so were insulated from the waves they were making. “We were walking away from the performing-in-big-basketball-arenas side of our nature,” the guitarist adds. “Instead I’d get home and play on the front porch.”

With touring off the agenda, the four-piece now had a rare luxury, time; to spend in Athens, Georgia, finessing songs for their follow-up, hanging out with friends and family, and visiting restaurants like soul food joint Weaver D’s. Although some of Out Of Time hinted at a more baroque, sombre sound, the next LP they’d create, Automatic For The People, would be the darkest, deepest and most beautiful music REM would ever make.

Strangely, these explorations on mortality and ageing stemmed from a supremely happy, confident group; and even stranger, they struck a chord with people around the world, selling millions. “Oh yeah, we were enjoying not being on the road,” says bassist and keyboardist Mike Mills today, “making great music. That’s the great thing abut being in your hometown, you’ve got your friends there who remind you that you’re still the same schmo you always were.”