Quentin Tarantino: “It’s the hardest film I’ve ever had to make”

The director opens up about Once Upon A Time… In Hollywood 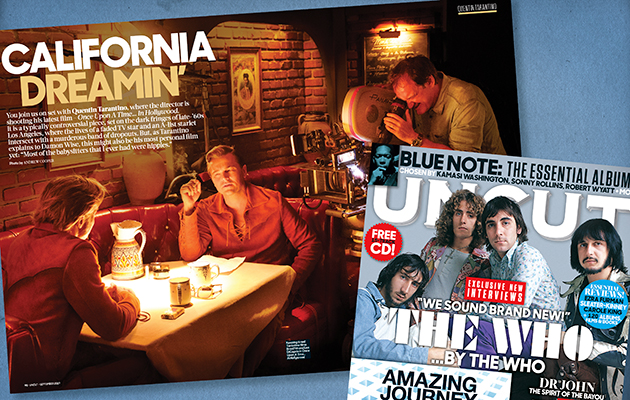 The latest issue of Uncut – in shops now or available to buy online by clicking here – features a lengthy interview with Quentin Tarantino, captured on the set of his new film Once Upon A Time… In Hollywood.

As the director explains to Uncut’s Damon Wise, Once Upon A Time… In Hollywood is not just a yarn about the social upheaval of  late-’60s California; it is a film freighted by the director’s own personal experiences of both the city and the era: “It’s a memory piece. I’m going back into my childhood self to remember what everything was like.”

Tarantino was six when he moved to Los Angeles in 1969, and, as you’d imagine from an arch pop-culture obsessive, he remembers the period in detail. “Extreme detail,” he stresses. “I remember what was on the network TV stations at that time. What was on local stations, what the bus stops looked like, the local celebrities… By the time you get to be about six years old, that’s when you start really being conscious about what’s going on around you. You start having TV shows that you want to watch, and you start going to movies. I was very aware of the whole counterculture, too. You couldn’t turn on television without seeing hippies, you’d see hippies on the street. Most of the babysitters that I ever had were hippies.”

Such fastidious recall, however, has proved somewhat problematic as the shoot has progressed. It’s not just that Tarantino’s crystal-clear recollections have set the bar particularly high for the production, but the city itself has changed almost beyond recognition since Tarantino’s childhood.

“It’s certainly different,” he admits. “In the past, say on Jackie Brown, that was me just going around shooting Los Angeles. But for this film, as far as I’m concerned, I might as well be shooting Moscow. Films like Inglourious Basterds, Django Unchained and The Hateful Eight were set-bound. Here, we’re actually shooting all over Los Angeles. Los Angeles is a character in the story and nothing is like the way it was in 1969. We have to create everything. It’s the hardest film I’ve ever had to make.”

But Once Upon A Time… In Hollywood is not a “true” story by any means – despite featuring real-life figures such as Sharon Tate, Steve McQueen and even Bruce Lee. Indeed, he bristles at suggestions that his film is in any way nostalgic. “I don’t consider it nostalgia,” he says. “I just like creating this time of hippie Hollywood, and I like telling the story through two characters who are outside of the gate of hippie Hollywood – who didn’t realise that it was gonna change and can’t believe it changed so quickly.”

You can read much more from Quentin Tarantino – including his thoughts on the Manson murders, and whether his next film really will be his last – in the latest issue of Uncut, in shops now with The Who on the cover.