Vaughan Oliver, the in-house designer for 4AD who created iconic album artwork for Pixies, Cocteau Twins, The Breeders and more, has died aged 62.

Adrian Shaughnessy, a graphic designer, writer and publisher who co-edited the 2018 collection Vaughan Oliver: Archive, broke the news on Twitter on December 29, adding that his death was a “great loss of friend and design hero.”

Desperately sad to announce that Vaughan Oliver died peacefully today, with his partner Lee by his side. Great loss of friend and design hero. Vaughan Oliver (1957—2019.

4AD founder Ivo Watts-Russell said, “Vaughan Oliver taught me to appreciate quality. He taught me how to look at the physical world. He was a force of nature.” 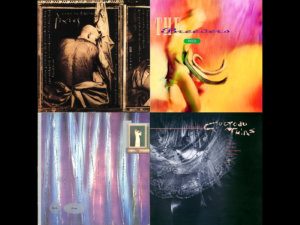 Oliver began working for 4AD in the early ’80s, where he established the visual identity of 4AD as a record label.

Oliver’s design studios, 23 Envelope, consisted of Oliver and his original photographer Nigel Grierson, who together created the artwork for almost every 4AD release up to 1987. After Grierson left 23 Envelope in 1988, Oliver continued to work for the label under the studio name v23, where he collaborated with Simon Larbalestier, Marc Atkins and many others.

Outside of music, Oliver also designed for commercial clients including L’Oréal and the 2012 London Olympics Games, and directed TV adverts for Microsoft, Sony and Harrods.

He was also Visiting Professor Graphic Design at the University for the Creative Arts in Epsom, Surrey.

Here are some of the tributes paid to Oliver by Pixies:

In Memoriam, our friend Vaughan Oliver, 12 Sept, 1957-29 Dec, 2019. “Man’s testicle alone (pushed through a piece of card to ensure it’s loneliness).” You will be missed. @4AD_Official @beggarsgroup #vaughanoliver pic.twitter.com/7mGoHJPnPo

Shocked and saddened at the death of an icon of art & design. His 4AD designs are legendary and his sleeves for @wearesnowbird & @Ibreakhorses both on Bella Union were superb. A funny and lovely man, who adored his family, I cannot believe he’s gone so early. Rest in peace fella.

Absolutely gutted to hear about Vaughan Oliver.
Someone asked me recently if working with him had been ‘claustrophobic’ as he seemed to thrust his ideas onto the artists and he didn’t seem to care what they felt about his designs.
Well, I’ll tell you what happened.. 1/2 pic.twitter.com/hckA503rbe

Vaughan Oliver remembered by 4AD founder Ivo Watts-Russell – "Vaughan Oliver taught me to appreciate quality. He taught me how to look at the physical world. He was a force of nature and I’m having such a hard time processing this." Continued: https://t.co/Ii8IidWKCm