Patti Smith: “I was a born outsider” 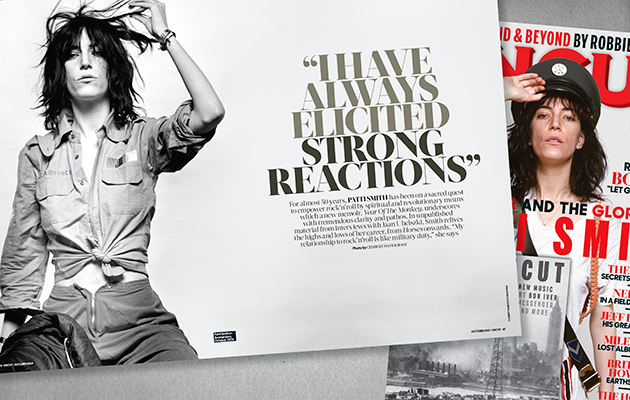 The new issue of Uncut – in UK shops now and available to buy online by clicking here – features Patti Smith as its defiant cover star.

Inside, we investigate her latest memoir Year Of The Monkey while looking back over her storied career via candid, unpublished interviews with Jaan Uhelszki, one of Smith’s greatest champions.

During an intense meeting in San Francisco in 1996, 18 months after the death of her husband, Smith talks about her role as a bellwether – more of an oracle than a rock’n’roll star. “The mission to me is communication,” she says. “What you’re communicating changes nightly. Some nights seem like an antiwar rally. Some nights seem like a comedy-club night, because I just joke around a lot and tell stories. Some seem like classic rock shows. The mission, though, is to communicate, and you have to pay attention to the people’s needs. Sometimes people really want you  to talk to them.”

Which is true whether on stage or off. When people encounter Smith, they want to engage. She reveals that when she walks around New York’s Lower East Side, garbage men hail her, waitresses always want to give her free pastries, ladies in flowered hats smile at her and well-dressed strangers would come up to tell her how sorry they were to hear about the death of her husband. No-one is neutral about Patti Smith.

“I have always elicited strong reactions,” she acknowledges. “People have either been drawn [to me] or repelled by me. I was like that even  as a kid. I think that’s only magnified a little bit because I’m somewhat known. But I think even  if I wasn’t known that quality would remain. There’s obviously something about me that people either feel like they’ve known me all their lives or they don’t want to. It’s just this innate quality I have, it’s like this certain kind of charisma, which sometimes works against me  or sometimes works for me. I was a born outsider. I’m so used to being on the outside for whatever reason, even as a kid, so I don’t even look any more for people to understand me.”

On stage, she is so casual, so intimate, so unscripted, admitting her mess-ups and laughing at her false starts and forgotten lyrics, that people love her more for those human moments than if she delivered  a seamless performance. She’s never been averse  to admitting she has had a real tough time that  day, or acknowledging that ongoing irritation at photographers when they break her concentration. Since she has little personal vanity and is a photographer, one wonders if it’s because they break the spell of performance, that trancelike state she admits she has gone into while on stage. “William Burroughs and I used to talk about it,” she says. “That sort of a shamanistic arena that one enters. You bridge the worlds.

“It does happen,” she continues. “I have had enough proof of that that I don’t think of it as being… odd. It’s like some people are good at gardening and some people are mathematical geniuses. Somebody like Einstein, he bridged these other worlds. It’s part of our humanity, and these things happen to me.”

You can read much more from Patti Smith in the new issue of Uncut, in shops now.