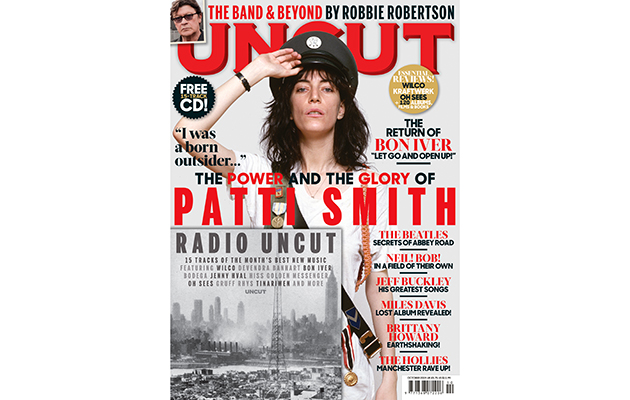 At the risk of sounding needlessly hifalutin, this issue of Uncut contains some discussion about the transformative nature of music. Here’s Justin Vernon, for instance, talking to Stephen Deusner about the new Bon Iver album. “I’ve always been obsessed with music and what it does to people,” he says. “Bob Marley was a huge thing for me – wow, he actually changed the political landscape in Jamaica. I like the idea of the power that prayer has. If music is the religion, then these songs are prayer to simply being people on Earth.”

Elsewhere, between anecdotes about Dylan, Scorsese and The Band, Robbie Robertson tells Nick Hasted about the deeply spiritual link between music and the natural world he experienced during childhood, visiting family on the Six Nations Reserve outside Toronto. “They had this connection with the wilderness and the earth,” he recalls. “They know how to grow things and make a weapon in a minute, and they all carry knives. Everybody played music, and knew how to run into the fields and pick wild strawberries. There was a beauty to that.”

And then there is this month’s cover star, Patti Smith, who has spent the last half century seeking to bring spiritual wisdom and prophetic power to rock’n’roll. “I didn’t enter rock’n’roll to say, ‘Hey, brothers and sisters, put your hands together,’” she reveals to Jaan Uhelszki. “I always felt that rock’n’roll was a forum for spiritual issues, political issues, revolutionary issues.”

Jaan first met Patti in Detroit in the early ‘70s, when she was writing for the legendary Creem magazine. Jaan was also there when Patti first met her future husband, Fred “Sonic” Smith at the Lafayette Coney Island hot dog emporium. Jaan has spoken with Patti on many occasions since then and our exceptional cover story – which consists of previously unpublished interview material – presents a series of unique snapshots of Smith during critical moments in her life and times.

There is more, of course. Tom Pinnock charts the magical prowess of Jeff Buckley, song-by-song, with help from his closest friends and collaborators, John Lewis digs deep to unearth the amazing story of a lost Miles Davis album and The Hollies regale us with tales involving Jack Bruce, Burt Bacharach and day jobs at the Burco Dean appliance factory in Burnley.

There are further new interviews with Brittany Howard, Devendra Banhart and Bat For Lashes. We salute the return of Betty Davis, check out a new film about record shops and hear all about Paul McCartney’s attempts at perfectionism during The Beatles‘ sessions for Abbey Road. Our 15 track CD brings you some of the month’s best new music, including Oh Sees, Wilco, Hiss Golden Messenger, Jenny Hval, One Eleven Heavy and Gruff Rhys.

As ever, let us know what you think: letters@uncut.co.uk.