Oh Sees: “We’re not out there to appease anyone” 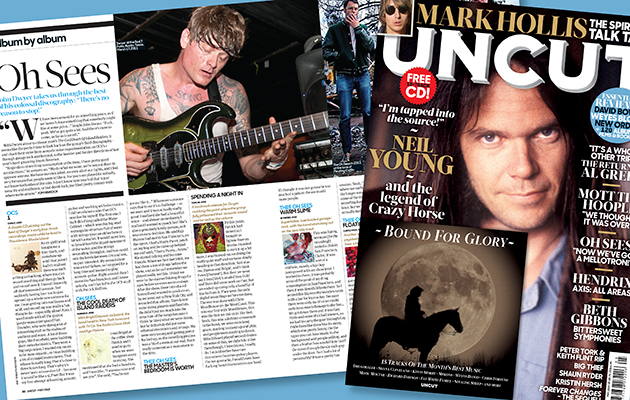 In the current issue of Uncut – in shops now or available to buy online by clicking here – we look back at Oh Sees’ fluid discography and chart their move from acoustic noise experimentation through garage rock and beyond, to the heavier and hairier directions of last year’s hard-grooving Smote Reverser.

“We have been around for 20-something years, so if we haven’t done something that somebody might like at some point…” laughs Oh Sees’ John Dwyer. “Fuck, yeah. We’ve got quite a bit. And there’s more to come, as far as I can tell.

“We do what we want, we’re not out there to appease anyone,” he continues. “We have our own label, we own all of our rights, and I feel very fortunate that people seem to like it. For years we played for nobody,  so I know both sides of the coin. I don’t know how much of that is just tenacity and resilience, or just dumb luck, but I feel pretty content with where we’re at now.”

Here’s an excerpt from the in-depth chat with Dwyer, focusing on 2006’s The Cool Death Of Island Raiders, which is re-released today (April 5).

“I met Brigid [Dawson] at the coffee shop Patrick [Mullins] and I used to go to when we were hungover every morning. She mentioned that she had a band too, and I was like, ‘I wanna come and see you’. She said, ‘You’re not gonna like it…’ Whenever someone says that to me it’s a challenge – so we went and it was actually really great. I realised she had a beautiful voice – and almost immediately I realised I wanted to poach her!

“She’s also a genuinely lovely person, so it was an easy decision. Me and [TV On The Radio’s] Kyp Malone had met in San Francisco, on the street. I had a Harry Pussy patch on my bag and he came up behind me and said, ‘Harry Pussy… hmm.’ We started talking and became friends. When we first met [TV On The Radio’s Dave] Sitek, we had done a ton of drugs before the show, and as far as I remember we played really terribly. I think we were in the stairwell doing drugs for ages before we even went onstage. After the show, Dave introduced himself and wanted to produce us.

“So we went out to New York City and recorded that album. Dave knew some string players and flautists.  He didn’t put too much into the structure of the songs because I think he liked what we were doing, but he definitely did put some ethereal electronics and strings. We were very young and getting pretty fucked up, so the recording process was a bit of a mess at our end. But it really came out as a monument to the time.”