Nick Cave: the mysteries of Ghosteen revealed in the new Uncut! 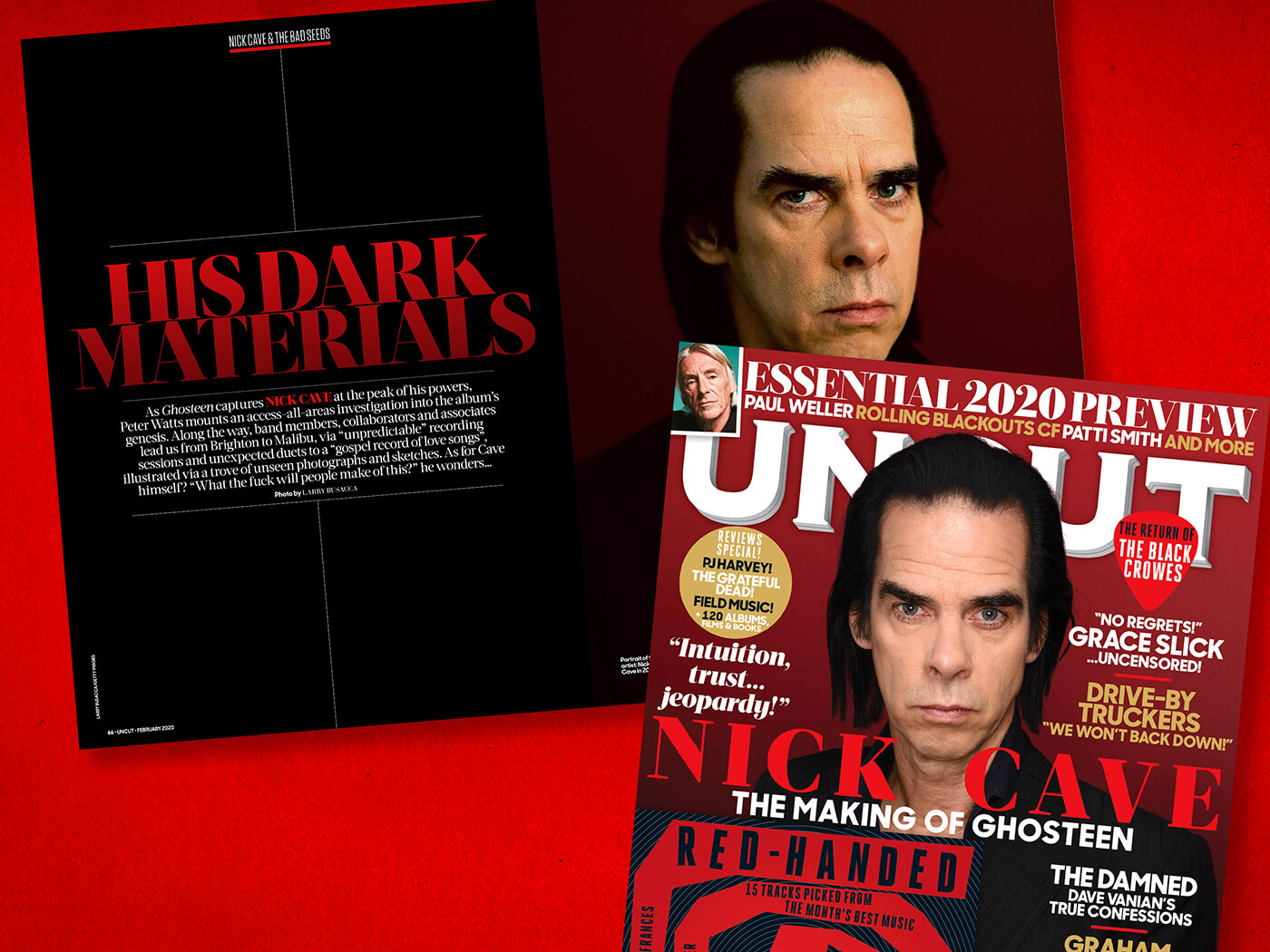 The new issue of Uncut – in UK shops now or available to order online by clicking here – features an access-all-areas investigation into the making of Nick Cave & The Bad Seeds’ recent masterpiece, Ghosteen.

Peter Watts speaks to band members, collaborators and associates about Cave’s latest voyage into uncharted waters, gaining an exclusive insight into the ideas, conversations and freeform studio sessions that led to one of finest albums of 2019 – and of Nick Cave’s long career.

“It‘s a strange and wonderful thing and very different from what has gone before,” Cave told fans in September 2018 on The Red Hand Files when trying to explain the chemistry between him and fellow Bad Seed Warren Ellis. “I can’t really define it but something happens; something that has to do with intuition and trust and jeopardy – the willingness to risk and, of course, to fail.”

Cave told The Guardian in May 2017 that he was working on new songs, “Not to answer Skeleton Tree… but to artistically complete the trilogy of albums we began with Push The Sky Away.” Work formally began on Ghosteen at Retreat Studios in Brighton during late spring 2018. Over the course of a week or so, Cave and Ellis sketched out pieces of music, with Cave at the piano and Ellis at his Yamaha Reface DX synth. Ellis then selected 20 pieces that they took to Malibu’s Woodshed Recording Studio a few months later.

Andrew Dominik has known Cave since the 1980s when he started dating one of Cave’s ex-girlfriends. Despite this, the pair got on – “I didn’t want to like him but I really did,” jokes the director. In 2007, Dominik asked Cave to score his western The Assassination Of Jesse James, although they only became close after Cave invited Dominik to film the final stages of the Skeleton Tree sessions for another documentary, One More Time With Feeling. By 2018, Dominik found himself with nowhere to live. “I broke up with my girlfriend and Nick fed me like a baby bird,” he says. For several weeks in September, Ellis, Cave and Dominik lived together in Malibu.

Joining them in Woodshed, Dominik observed as the material Cave and Ellis began in Brighton gradually evolved. He also witnessed the uncanny creative partnership between the two men in motion. “Nick and Warren sat in the room together playing music,” recalls Dominik. “Warren has an enormous influence on Nick. Nick is more into formal ideas of structure and whether or not a piece of music sounds good. Warren doesn’t give a fuck about anything except how a piece of music feels. Nick doesn’t really let his control go, but working with somebody like Warren allows him to move. He couldn’t do that with any other person. They react to each other. Warren makes sounds that provoke a feeling that Nick writes lyrics for – then Warren reacts to them musically. It’s something chemical between them.”

Up until Push The Sky Away, Cave went to work in his office – a flat connected to his home in Hove – and put in an honest day’s work. Dominik, however, suggests a different approach to songwriting on Ghosteen, whereby Cave would assemble songs from a variety of sources including notebooks, his own memory and on-the-spot inspiration.

“Nick would sing lyrics from this song or that song, bits from all over the place,” explains Dominik. “The songs became a lot less structured. He is approaching the songs in the moment, rather than sitting down and writing more structured material. He talks about the unconscious life of the song – he is most interested when he is doing something but doesn’t know what it is yet. He likes the unknown.”

You can read much more about Nick Cave and Ghosteen in the new issue of Uncut, in shops now.