The making of John Lennon’s Imagine: “He knew what he wanted”

In an exclusive book extract, Uncut ventures behind the scenes of Lennon's masterpiece 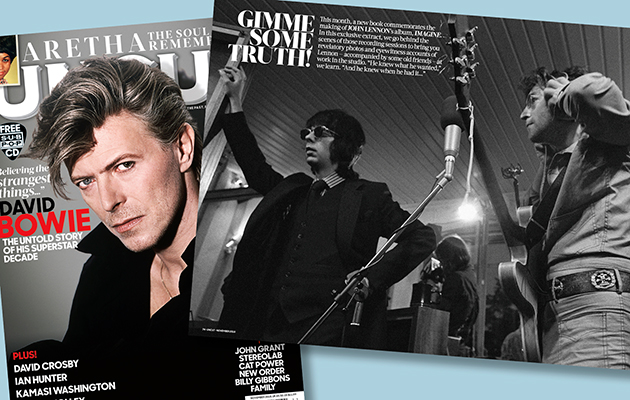 The current issue of Uncut – in shops now or available to order online here – features an exclusive extract from Imagine John Yoko, a new book about the making of the Imagine album.

Alongside stacks of previously unseen photos and handwritten lyric notes, there are contributions from musicians Klaus Voormann (bass), Alan White (drums, percussion) and Jim Keltner (drums, tabla) about what it was like to make Imagine.

“John worked fast,” says White. “He knew when something was right and was definite about his ideas. He knew what he wanted – and he knew when he had it. I remember him saying to me, ‘Whatever you’re doing, just keep doing it.’ He didn’t try to control what I was playing; he seemed to trust my musical interpretation and allowed me the freedom to play what I felt. I got on with the job, listening to a song and then translating it into my style. Once we had a great take, it gave us all such a great feeling.

“Yoko was always at John’s side, giving him advice and ideas to make it better. She was very much part of the whole thing. Phil Spector was  a bit of a strange guy. He seemed extremely paranoid, but he was totally into the project.  John would talk to him and, gaining confidence, say, ‘Am I doing the right thing?’”

“When we did ‘Jealous Guy’, Jim Keltner played the drums and I ended up playing vibraphone in the toilet in the corner of the studio. It had a little door, with a four- or five-inch crack, and I could see everybody through there. It was, ‘One, two, three, four…’ and then we were playing. John gave me a great credit on the album. On the sleeve notes inside the record, he wrote, ‘Alan White: Good Vibes’, which meant a lot to me. It was all good vibes when we were making Imagine. Everybody was really happy. And when everybody is happy in a studio, the happiness comes through the music – and there is a lot of great music on that album.”

“When I think of those sessions, I always think of ‘Jealous Guy’,” says Voormann. “I’m sitting there. I don’t even know what key I’m in. I have no idea. I just play. It just goes like a dream, you know? It’s such a beautiful song and it just flows. I close my eyes and listen to John, and just play. And then those notes come where there is space for them, or when I think they should be played at that particular moment.

“When we played ‘Imagine’ and heard the lyrics, the possibility that this was going to be such a big song was apparent. It definitely was. I even thought I didn’t want to play on it because it was so amazing with just John playing piano. It was so true and honest. That would have been enough.”

Read much more about the making of Imagine in the current issue of Uncut, on sale now with David Bowie on the cover.